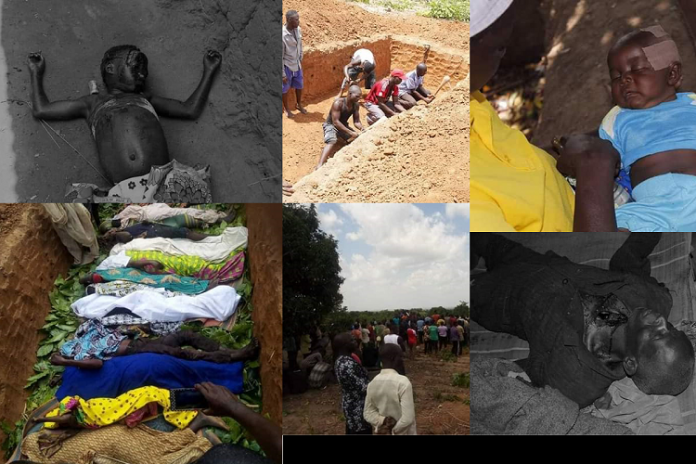 Eyewitnesses in Kajuru Local Government Area of Kaduna State have described in graphic detail how their communities were invaded on Tuesday by armed Fulani herdsmen leading to the death of 17 unarmed villagers on the first day and five more the following day.

“They came around 11:30pm, broke into the home of Jonathan Yakubu, 40, and slaughtered him. They also killed his wife, Sheba, 32, and hacked to death their three children, Patience, 13, Revelation, six, and Rejoice, four, thus wiping out the entire Yakubu household,” according to Sahara Reporters.

In what is being noted as systematic direct war against Christianity in Nigeria, Pastors, Christian Leaders and Seminarians are either being kidnapped or killed every week.

Christians in Nigeria have been the target of many attacks by the vicious Boko Haram jihadist Islamist terrorists, herdsmen attacks and many other kidnapping in recent times.

Nigeria ranks as the 12th worst country in the world on Open Doors USA’s 2020 World Watch List of countries where Christians are most severely persecuted. Nigeria was added to the U.S. State Department’s special watch list of countries that tolerate or engage in severe violations of religious freedom in December.

Luka Binniyat, spokesperson for the Southern Kaduna Peoples Union, told SaharaReporters about the situation on the ground when he visited the community.

He said, “We met relations of the Yakubu’s who were sobbing beyond consolation in front of the house Yakubu had built.

“From this compound, trail of blood led to another gory scene of where Kauna Magaji was killed along with her daughter, Faith Magaji who died of grisly cutlasses cut to their heads.”

Binniyat disclosed that the attackers continued with the killing of a mother and severely injuring a baby she was holding with bullet.

He added, “The killers went to another compound where they met Saraunia Lucky, 25, newly married and had given birth to her baby three months ago.

“With the baby cuddled in her arms in fear, she was shot dead and the bullet passed through the soft skull of the baby. But by some strange streak of luck the baby survived and was rushed to a nearby hospital where a bullet was removed from its head.

“When we visited the village, the baby was nursed by its auntie who also looked helpless. She told us that since the previous night, the baby had not had any milk but was only taking water. She said that where she could buy infant milk was under lockdown.”

Yaro Dalhatu, 56, and his wife, Saratu, 45, their granddaughter, Blessing Yari, 14, was also killed.

Another boy named Popular Teacher, who just turned 17 was shot and killed.

PHOTONEWS: Eyewitnesses in Kajuru LGA of Kaduna State have described in graphic detail how their communities were invaded on Tuesday by armed Fulani herdsmen leading to the death of 17 unarmed villagers on the first day and five more the following day.

“They are the same group that attacked the previous night, they came again this morning.

“The Fulani people who live in the communities all disappeared hours before the attack,” another source said.

See Photos Of The Massacre Below (Viewer’s Discretion Advised)