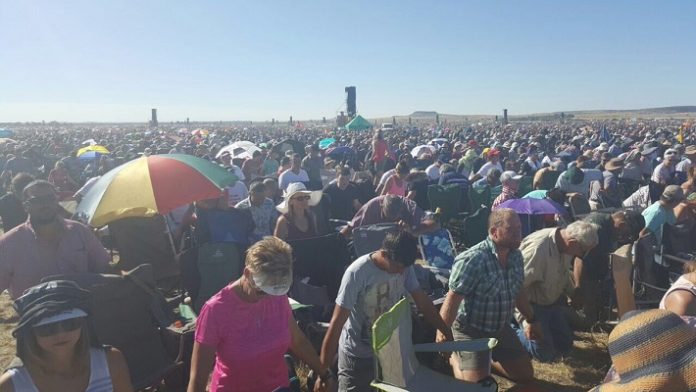 Over 1.7 million South Africans, in what has been described as the biggest prayer gathering in history, got on their knees before God this weekend in Bloemfontein to pray for their beloved country. Citizens of all races, colours, cultures and religious denominations gathered at the free event, hosted by Angus Buchan.

The seed for the gathering was planted when a WhatsApp video did the rounds with a desperate outcry for popular preacher Angus Buchan or any other spiritual leader in South Africa to intervene and arrange such an event. When Buchan replied by posting a video on social media, he received 1,8 million responses within hours.

Buchan said the day was “indescribable,” declaring, “Father God, we give you all thanks and praise, glory and honour.”

Thousands Of Muslims Baptize As They Cry For Joy, Speak In Tongues

Concerned citizens of all races, colours, cultures and religious denominations gathered at the free event near Bloemfontein.

“The day of prayer is intended for all South Africans of all genders, races and denominations who are concerned about the malice, hatred, violence, murder and corruption in the country,” says Buchan.

“We are tired of people taking the law into their own hands. We are going to call upon The Lord to bring justice‚ peace and hope to our beloved South Africa‚” Buchan said in a statement on his website.

Buchan is well known for his television sermons and the popular move‚ Faith like Potatoes‚ based on his book by the same title.

Why I Was Excommunicated From The Church – Pastor Kumuyi

Extraordinary gathering of more than 1m people in Bloemfontein to #pray for #SouthAfrica #Itstime @angusbuchan pic.twitter.com/8FFKoBJGPg