Home News Coronavirus: Pastor Prays Wife Back To Life After Being Unconscious For Weeks 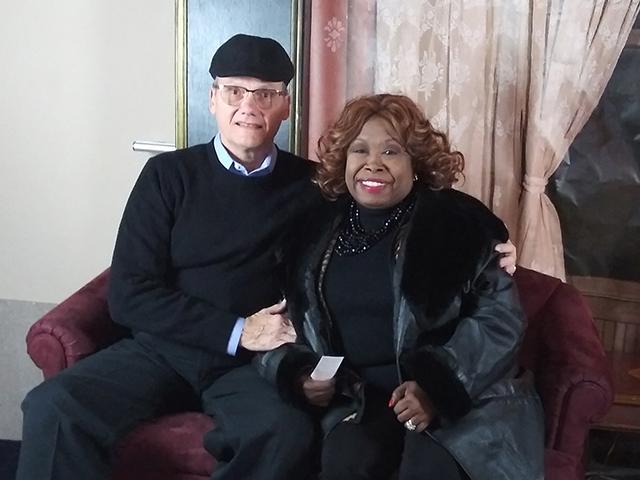 A pastor’s wife, who was left unconscious for three weeks after falling ill with coronavirus, has woken up and is recovering after the pastor prayed for her until she awoke.

Pastor Leonard Himes, who is an associate pastor at Beulah Missionary Baptist Church in Decatur, Georgia, rushed his 63-year-old wife, Claudette, to hospital in mid-March. She was suffering with a bad fever, was confused and had other flu-like symptoms.

They were approaching their eighth anniversary. But for Claudette and Leonard Himes, that milestone might never come. On March 16th, Claudette began to suffer from a fever that hit 102-degrees and wouldn’t come down even with medication. Then the 63-year-old accountant began to have trouble breathing. That’s when Leonard rushed her to the hospital.

Claudette tested positive for COVID-19, and her case was a bad one.

Claudette’s life was now in danger. Doctors decided to move her to ICU and place her on a ventilator to help her breathe. Leonard would not be allowed to be in there to pray with her and encourage her. But before they moved Claudette, he told Fox 5-News that he quickly said a prayer.

Little did Himes know that Claudette would end up testing positive for the new coronavirus and would be hospitalized for the next three weeks with a breathing machine in Emory St. Joseph’s intensive care unit, Christian Post reports.

“He tells me the stories of how bad it was, what I went through. It was mind-blowing,” Claudette, who has no memory of the battle she fought, said. “I just thought that I had the flu.”

Claudette spent 12 and half days on a ventilator at the hospital and her husband was unable to see her in person for 18 days.

The pastor, who has been married to Claudette for eight years, recalled how challenging it was.

“In a normal circumstance, you can be by the side of your loved one and care for them and pray with them, and be there to at least know what’s going on. But through this pandemic, the severity of it, we had to be totally separate,” he said.

Eleven days passed and Claudette was not getting any better. In fact, she was getting much worse with no obvious signs of improvement.

Leonard Is Advised to Say Goodbye

Leonard said that at that point, he got devastating news. The doctor told him that Claudette’s lungs were full of pneumonia and that it was time for him to meet with palliative care to discuss last decisions and essentially talk about “when you want to unplug this,” CBN News reports.

‘Quarantine Revival’ – Over 132,000 Surrender To Jesus During Virtual Evangelistic Event

That night, he asked the ICU nurse and the chaplain to set up a baby monitor by Claudette’s bed so he could talk to her even though she was unconscious. For all he knew, it might be his last chance to do so. She was unconscious, but he sensed she could hear his voice and he just kept speaking to her in faith. He read Psalm 91 to her like he’d done many times since she first got sick.

“I was able to read to her, and prayed for her, and just let her know it was going to be OK,” Himes said. “The nurse and the chaplain that were in the room attending to her turned the camera back at them and they were just sobbing, with tears running down their face.”

Back at home that evening, Leonard was brokenhearted. He told CBN News he didn’t sleep at all that night. “I prayed through the night, weeping and calling on God.”

He says as he saw the sun come up that morning that he somehow felt peace. “I didn’t know if that peace meant my wife was going to be with Him, or that God was going to do something. But I had peace.”

Later that morning, Leonard was at home on the phone, actually in a conference call with the palliative care medical team and other family members when he began to get another call from his wife’s phone that had been left at the hospital. He dismissed it and kept on with the conference call. But whoever was calling was persistent and called three times. He couldn’t imagine what it could be. Surely, if something had happened to Claudette, her doctors that he already was talking to would know what was going on.

Protesters Declare ‘Jesus Is My Vaccine’ As Penn. Residents Demand Reopening Of Economy

“And she came running in there and saying, ‘Claudette was sitting up in bed, extubated, and breathing on her own.'”

The medical team still on the conference call was silent as they heard Leonard shout and praise God that Claudette was healed.

Finally, one of the doctors still on the phone said, “Leonard, it looks like you’ve received a miracle.”

Himes believes his wife’s revival was God’s answer to his prayer.

“What I do know is God is real and He answers prayer. And He answered this one,” he said.

And God’s blessing came just days before Claudette would celebrate her birthday.

A few days later, surrounded by her nurses, Claudette celebrated her 63rd birthday.

“Can you imagine having a birthday and someone telling you that you might not have made it?” she said. “And to breathe God’s air? Oh, my God, I’m just blessed.”