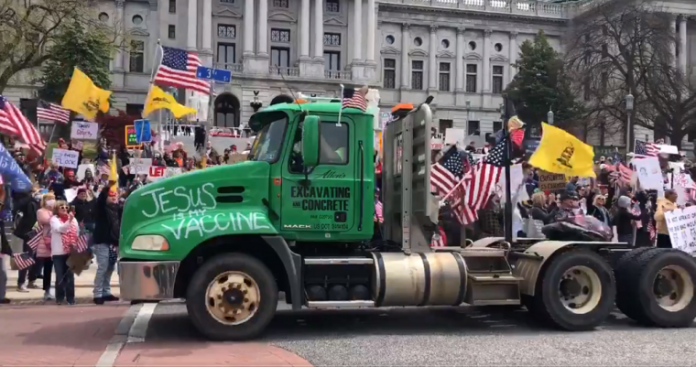 Hundreds of people, both in cars and on foot, gathered outside the state Capitol in Harrisburg on Monday for a rally to “reopen” Pennsylvania.

Pennsylvania residents joined by Republican lawmakers protested a stay-at-home order outside the state Capitol in Harrisburg Monday declaring messages like “Jesus Is My Vaccine” and demanded a reopening of the local economy amid the coronavirus pandemic.

The stay-at-home order which has been extended by Pennsylvania Gov. Tom Wolf until May 8, was put in place to manage the spread of the more than 33,000 confirmed cases of the virus in the state which had led to 1,200 deaths in the state, The Philadelphia Inquirer reported.

“These leaders must not focus on just the lives at risk from the horrible virus,” fellow Republican state Rep. Aaron Bernstine added. “Many lives like yours are in danger from a shuttered business, the hunger and homelessness.”

The scene in Harrisburg, Pa.

Similar protests have taken place in state capitals across the country, such as Michigan, Texas, Maryland, and Washington state, CNN reported, and additional protests in other states are expected to follow.

It’s estimated that between 22 million and 30 million Americans are now out of work due to layoffs sparked by state lockdowns due to the new coronavirus that originated in Wuhan, China, according to Christian Post.

Bernstine had been lobbying for Wolf to sign a bill aimed at reopening some businesses closed amid the pandemic but Wolf vetoed the legislation while noting that it was “not an easy decision.”

“Reopening tens of thousands of businesses too early will only increase the spread of the virus, place more lives at risk, increase the death tolls, and extend the length of the economic hardships created by the pandemic,” Wolf said in his veto message.