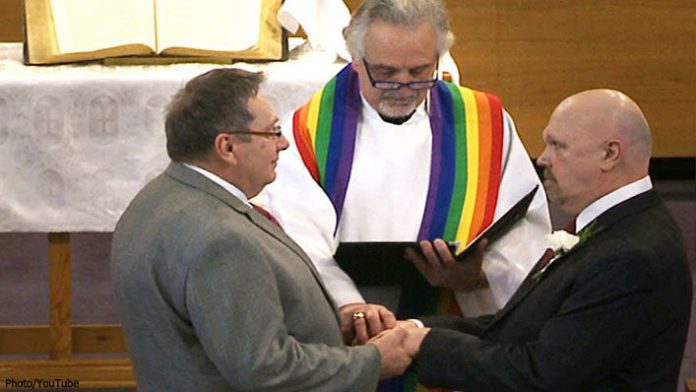 The Methodist Church, the largest mainline Protestant denomination in the United States, is headed toward a divorce.

In early January, mediators from across the United Methodist Church proposed a separation plan to split the church into two separate denominations, with one that will allow same sex marriages and “practicing” LGBTQ clergy.

Members of the General Conference, the church’s legislative body, are expected to pass the proposal in May. If a split occurs, it will be the result of nearly 50 years of failure to resolve the United Methodist Church’s ambiguous position on sexuality.

The Methodist Church added “united” to its name after merging with another denomination in 1968. But for much of the past 52 years, unity has proved elusive.

That’s been especially true at meetings of the church’s top legislative body, the General Conference, where factions have fought for decades about sexuality and Scripture. After the church strengthened its bans on partnered LGBTQ clergy and same-sex marriage last year, many Methodists argued that a split was likely inevitable.

“The situation here has become so toxic that the church was basically dysfunctional,” said the Rev. Keith Boyette, leader of the conservative Wesleyan Covenant Association.

Last week, Boyette was one of 16 United Methodist leaders to propose a divorce decree for their church. With the help of a renowned mediation lawyer, conservatives, liberals and centrists gathered in secret for months, sweating the details of a pact they hope will split the church without producing messy and expensive lawsuits, according to a report by CNN.

A conservative United Methodist Church leader has stated his support for a proposal that allows UMC churches to leave the denomination over LGBT issues.

The Rev. Joseph F. DiPaolo, member of the Wesleyan Covenant Association Council, said that while he used to support staying with the UMC to “contend for the faith once delivered to the saints,” he stated that “I no longer believe that is possible.”

Recently, UMC leaders representing diverse views on the LGBT debate announced their support for a proposal called the “Protocol of Reconciliation and Grace through Separation.”

If approved, the protocol would allocate $25 million for conservative Methodists to vote to leave the UMC and create their own Church, tentatively labeled “traditionalist Methodist.”

DiPaolo argued in a column Friday that the UMC is “irretrievably broken” due to the debate over homosexuality.

“Progressive clergy, churches and conferences stepped up their campaign of resistance, through defiance of our disciplinary covenant,” he wrote.

“Many bishops have been complicit, either through overt support, or by failing to exercise any meaningful accountability toward those who break their covenantal vows.”

He called the proposal for separation “the doorway” to “a vibrant, renewed and global Wesleyan movement,” Christian Post reports.

“This is really painful,” remarked United Theological Seminary Dean David Watson, an attendee of the conference. “Our disagreement has pitted friend against friend, which no one wanted.”

“We Africans are not children in need of Western enlightenment when it comes to the church’s sexual ethics,” said Reverend Jerry Kulah of Liberia’s Methodist Theology School. “We stand with the global church, not a culturally liberal church elite in the U.S.”

The UMC Book of Discipline currently states that homosexuality is “incompatible with Christian teaching” and prohibits clergy from blessing or being involved in same-sex marriages.

In spite of the official ban, several members of the clergy have still officiated homosexual marriages and come out as gay without penalty.

While the protocol remains a proposal, the measure has garnered great attention since many prominent church leaders across the theological spectrum have expressed support for it.

The UMC will hold its next General Conference, where legislative proposals regarding a possible schism will be entertained, in Minneapolis on May 5-15, 2020.

If the Traditional Plan comes to pass, the church will call for much stricter and more regulated enforcement.