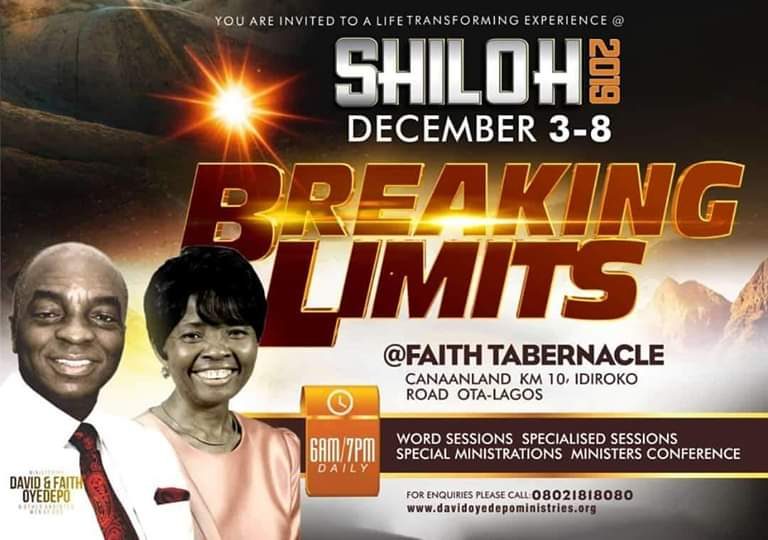 In the Bible, Shiloh was the major Israelite worship center before Solomon’s temple was built in Jerusalem. Shiloh was chosen as the worship center of Israel after the conquest of Canaan. Recall that after the Children of Israel conquest of Canaan, the Tabernacle and the Ark of the Covenant were installed in Shiloh? making Shiloh the first center of worship in the Promised Land.

References are made to Shiloh in the Books of Joshua, Judges, 1 Samuel, 1 King, Psalms, and Jeremiah. According to Judges 21:19, the Shiloh of old is situated north of Bethel, east of the Bethel–Shechem highway, and south of Lebonah in the hill-country of Ephraim.

Shiloh has been synonymous with miracles; from Joshua leading the Children of Israel to victory after worshipping God at Shiloh, to God using his prophet Eli to open the barren womb of one of Elkanah’s wife Hannah, who later conceived and bore the Prophet Samuel.

The modern-day Shiloh which is an annual gathering of Christian faithfuls of the Living Faith Church Worldwide (A.K.A) Winners Chapel, at the church’s international headquarters in Canaan land, Ota, is a mandate from the book of Joshua 18:1

Every year in December, the Living Faith Church hosts a global event called Shiloh. The church says the mandate for this event is drawn from the Bible books of Joshua 18:1 and 1Samuel 1:3. The event is held mostly in the first week of December.

The church sees the purpose of the event as being to usher the visitation of God to his people. It also marks the end of the Church year.

As of 2012, there were millions in attendance. The Presiding Bishop David Oyedepo, also said up to 160 nations hooked up to Shiloh 2015, with nationals from 55 nations present at the Canaanland, Ota Ogun State