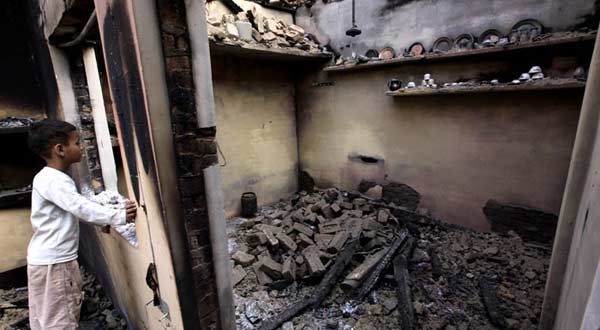 Tribal animists in eastern India earlier this month surrounded a church building with axes, threatened to kill Christians within and later burned down the thatched-roof structure, sources said.

India: Jesus Appeared To Hundreds In The Clouds (Video)

“After we concluded the prayers and community lunch service [on Dec. 1], a batch of around 15 tribal men came with axes, surrounded the church and threatened that they will chop us into pieces,” pastor Bibudhan Pradhan told Morning Star News.

The assailants surrounded the pastor and his wife as they were trying to return to their home in another town, he said.

“They took us inside the village and held us hostage for more than four hours,” Pastor Pradhan said. “They abused us in vulgar language, words that I can’t utter with my mouth, and threatened us that their gods and goddesses will swallow us alive for propagating Christianity in an Adivasi [indigenous tribal] hamlet.”

He and his wife remained calm in captivity, he said. Church members told the assailants that the pastor had to return to his home in Rayagada and suggested they take them in place of him and his wife. The assailants released the couple with an ultimatum to stop worship services and never again enter the village.

They took no one else hostage, but that night they set the mud-and-bamboo structure on fire, the pastor said.

“Christians from the Adivasi hamlet reside about one kilometer far from the church site,” Pastor Pradhan said. “But the fire spread faster, and within 10 to 15 minutes the roof made of dry grass shattered, and the bamboos also caught fire.”

On Nov. 26, after village Christians had gathered for an hour-long prayer at the church site, a gang of drunken animists raided their homes as they slept, he said. The Christians were unable to call police as the area has no cell phone coverage.

Church elders rushed to Pastor Pradhan’s home the next morning.

“They were horrified by what happened the night before,” he said. “The drunk men abused the Christian families in filthy language and forcefully searched their homes for Bibles. The Christians tried hard to resist them to no avail. They gathered the Bibles from Christian homes at one spot at the center of the village, poured kerosene and lit fire.”

The animists, who worship gods based in ancestors, spirits and nature, ignored their pleas to calm down and spare their Bibles, he said. Pastor Pradhan and the elders complained to village elders that day.

“But the elders of Perigaon village justified the act of burning Bibles and in return abused me in filthy language,” he said. “They said that because of me the village has lost its rich culture and values, and that I had introduced a foreign faith, and that my presence and the Christian prayers in the village had hurt them deeply.

“They also issued threats that they would go to any extent to put an end to the spread of Christianity in the village.”

Nine of the approximately 75 families in Perigaon village are Christian, he said.

“My wife and I had been ministering in Perigaon for the past four years,” Pastor Pradhan said. “At least thrice the tribal extremists blocked us from entering the village by laying huge branches of trees on the road.”

Believers in India—number 10 on the 2019 World Watch List—are often shunned, unjustly arrested, attacked—even killed—because they choose to follow Jesus and not Hinduism or the local religion. Our Indian family needs the prayers of the global church to stand strong in the midst of persecution—and to remain a light for Christ in the world’s second-most populated country.