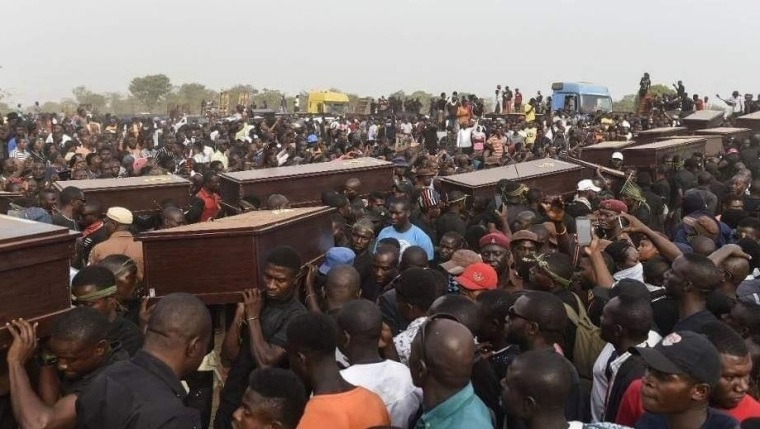 A Nigerian civil society organization is reporting that no less than 50 Christians were killed in March and 10 in the first two days of April by radical Fulani herdsmen.

“In all, not less than 410 Christian lives have been lost in Nigeria to Jihadist Fulani terrorists in the past 93 days of 2020,” the Anambra-based International Society for Civil Liberties and Rule of Law (Intersociety) said in a statement.

US Christian Leaders Meet Victims Of Boko Haram and Fulani Herdsmen Massacre: Shocked At What They Saw

Since the start of 2020, estimates suggest that over 400 Christians were killed in the West African country.

Ten Christians were killed in the first two days of April, it added.

Intersociety is a nongovernmental organization headed by Christian criminologist Emeka Umeagbalasi. Through a team of criminologists, lawyers, journalists as well as peace and conflict studies graduates, Intersociety has monitored violence against Christians in Nigeria since 2010, according to Christian Post.

In addition to Umeagbalasi, the statement released Saturday was signed by lawyers Obianuju Igboeli, Ndidiamaka Bernard and Chinwe Umeche.

A previously report by Intersociety shows that 350 Christians were killed in the first two months of 2020 by Fulani militants, highway bandits and the Boko Haram terrorist group in the northeast.

“This is on daily average of about five Christian deaths. On average, the Jihadist Fulani militants killed 125 Christians in January and February, respectively, and 50 in March.”

Since 2015, about 11,500 Christians have been killed in Nigeria, according to Intersociety. The killings are largely a result of increased terrorist attacks from Boko Haram splinter groups and overnight attacks carried out by radicalized Muslim nomadic Fulani herders against predominantly Christian farming communities in Nigeria’s Middle Belt.

The NGO relies on what it deems to be credible local and foreign media reports as well as government accounts, data from international rights groups, eyewitness testimony and reports from Christian bodies to compile its estimates.

Intersociety argued in its latest statement, which only counts the killings committed by Fulani attackers, that the decline in reported killings in March could be a result of attacks being under-reported due to a shift in local and international media attention during the coronavirus pandemic. The decline is not a result of “change of heart” or “government counter successes,” it said.

The group’s statement comes as some international advocacy groups, including Christian Solidarity International and the Jubilee Campaign, are pressuring international actors to label the plight of Christians in Nigeria as a “genocide.”

On March 5, at least four Christians were reportedly killed and three women raped by Fulani attackers in the Guma area of the Benue state, according to Intersociety.

Between March 26 and March 31, in Southern Kaduna state, a total of 11 Christians, including a district head and his brother, were reportedly killed by Fulani militants.

On March 27, three more Christians were said to have been killed in the Chikun local government area of Kaduna.

On March 30, the district head of the Jema’a local government area of Kaduna Danlami Barde and his brother, Musa Barde, were reportedly killed while the wife of Musa Barde sustained several gunshot injuries.

On the night of March 31-April 1, at least three Christians were killed in the Ancha area of the Plateau state.

“According to the Southern Kaduna Peoples Union (SOKAPU), in its statement dated 31st March 2020, no fewer than six defenseless Christians were hacked to death in Komo Community, Guruku ward in Chikun [local government area] of Kaduna State,” Intersociety stated.

On April 1, seven elderly Christians in the Hukke and Nkiedoro communities in the Plateau state were reportedly burned to death during an attack in which at least 23 houses were burned or destroyed.