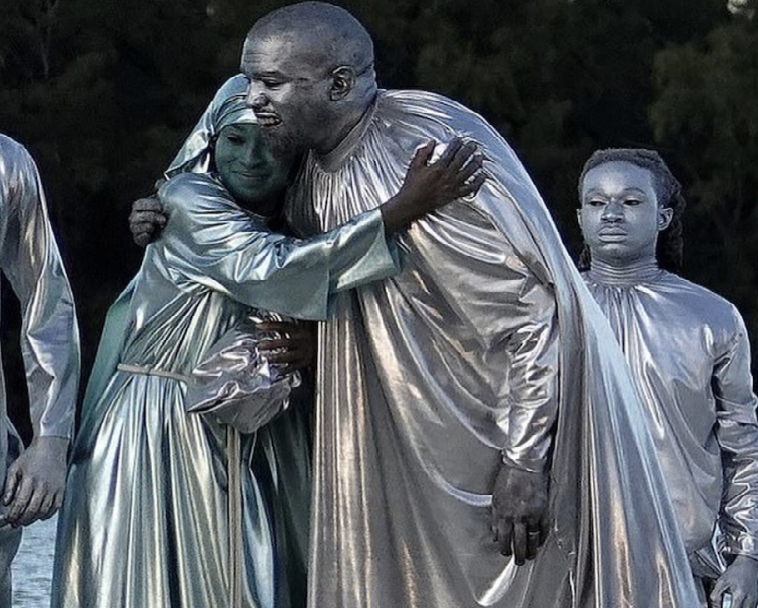 Hip-hop and fashion trailblazer Kanye West who embraced the Christian faith recently, brought his opera production “Mary” to Marine Stadium in Miami to share the message of the nativity.

West debuted the opera Sunday afternoon while artists from across the country gathered for the final day of Art Basel. The emcee and his production team, featuring personality Fonzworth Bently, gathered at the Miami Marine Stadium, which has closed for 27 years, adorned in silver face paint and metallic clothes.

“Mary” is West’s follow-up to last month’s production of “Nebuchadnezzar” held at the Hollywood Bowl in Los Angeles, California.

According to Vanity Fair, tickets for the opera were listed at $200 each and sold out in a day.

“A female opera singer’s voice filled the air, and then West’s voice took over. Over 300 prophecies in the Scripture described the coming of the Savior,” West read, according to the Vanity Fair report. “Jesus Christ fulfilled them all. One prophecy in particular declared the sign of His coming to be marked by a voice, a voice that would prepare the hearts of the people of Israel for the Messiah.”

“Mary” was made up of 12 scenes highlighting the birth of Jesus told through the eyes of West and Beecroft.

“West read Matthew 1:20 over the music: ‘The angel appeared to him in a dream, saying, ‘Joseph, fear not to take Mary for your wife, for that which is conceived in her is of the Holy Ghost.’”

The actress portraying Mary dressed in a traditional light blue garb along with the uniformed metallic look. Photos of the opera showed the divine family — Mary, Joseph and baby Jesus — taking shelter in a nook inside one of the hills which represented the manger.

Among those in attendance was famous performer Chance the Rapper who was spotted sitting in the bleachers.

For many years, West publicly projected a God complex through his blasphemous alter ego Yeezus. But in 2019, everything changed for him, and he began hosting Sunday Service events featuring a gospel choir that reimagined mainstream songs with Christian lyrics. The “Jesus Walks” performer declared he became a born-again Christian during this process and has since devoted his life to “working for God” and traveling the world as a music minister.

After the Christmas holidays, West, whose album Jesus Is King recently made Billboard history, will be joining Lecrae, Tauren Wells, and Hillsong Young & Free as a headliner on the Strength to Stand Bible Conference in Pigeon Forge, Tennessee, in January 2020.

Justin Bieber: I Am Not Ashamed of My Savior Jesus Christ