At least 70,000 people took part in the All Ireland Rally for Life on Saturday. 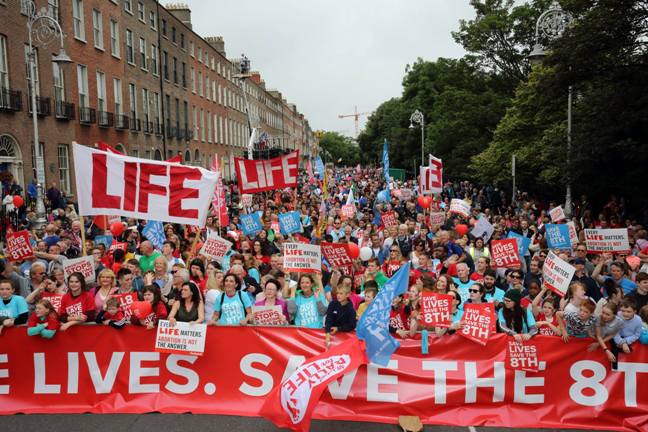 A huge crowd of pro-life supporters have marched on the streets of Dublin to show their opposition to abortion. The theme of this year’s march was “Save the 8th” with record numbers turning out to defend the amendment to the Irish Constitution, reports LifeNews.

“This is an incredible, powerful day, when massive crowds of ordinary people turned out to Save the 8th, to say no to abortion and yes to Life, to tell Leo Varadkar that he would lose this referendum on abortion, because the pro-life majority has arisen and will work night and day to Save the 8th,” said Niamh Uí Bhriain of the Life Institute.

“We were expecting 50,000 but as the Rally moved through Dublin City, up to 80,000 people brought the city to a standstill as they joined in to Save the 8th.”

Like many pro-life marches, the media tried to downplay numbers, and some outlets tried to reduce it to “Pro Life and Pro Choice groups take part in opposing rallies in Dublin”. However, this year’s rally was so big that it was difficult to ignore. Outlets were forced to issue corrections acknowledging the numbers, and the Irish Independent conceded that “the pro-choice campaigners were significantly outnumbered”. RTE, the national broadcaster, covered the rally in an unusually balanced news segment.

RTÉ Report on the Rally for Life 2017 acknowledge 70,000 marched in Dublin and interviewed some of those present. #savelives #savethe8th #rallyforlife

Posted by The All Ireland Rally for Life on Saturday, July 1, 2017