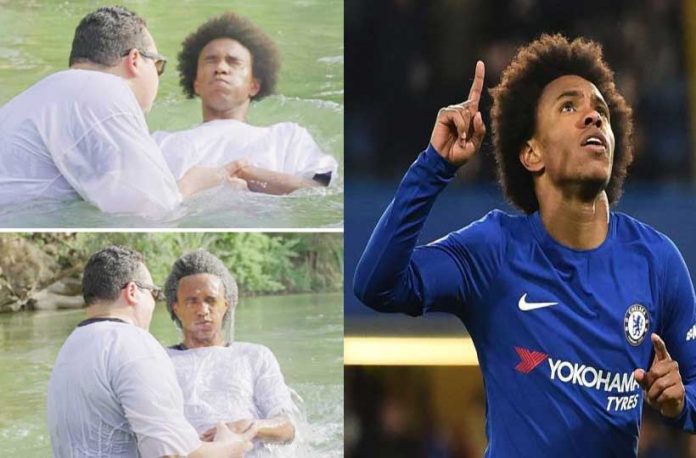 Chelsea star Willian has used his time away from football to take a holiday in Israel and get baptised in the River Jordan.

While to some, It might not be a big deal. But to this Chelsea F.C football star, Willian Borges da Silva commonly known as Willian, It is a thing of great joy as he re-affirms his confession and commitment to Christ and his way.

Jesus Is The Most Important Person In History: Liverpool Coach Jürgen Klopp

The Brazilian is on his summer break in Israel and posted snaps of the event to his to his 8.7m followers on Instagram.

He wrote the caption: “Joy in reaffirming my baptism, in a place that I consider extremely important. Jordan river!”

Willian briefly put contract talks with Chelsea on hold to seek spiritual nourishment after getting baptized in River Jordan.

He is understood to be a devout Christian, with the footballer acclaiming the significance of baptism in the religion.

Former Chelsea teammate Diego Costa responded to the snaps with a smiley emoji.

I response to Willian’s baptism at rivers Jordan his Tottenham Spurs rival and Brazil teammate Lucas Moura replied: “Glory to God! How wonderful, my brother. I’ll still know this place.”

River Jordan was the place where Jesus was baptized by John the baptist.

Coutinho Gets Baptized In His Bathtub

At that time Jesus came from Galilee to the Jordan to be baptized by John.
But John tried to prevent Him, saying, “I need to be baptized by You, and do You come to me?”
“Let it be so now,” Jesus replied. “It is fitting for us to fulfill all righteousness in this way.” Then John permitted Him.

As soon as Jesus was baptized, He went up out of the water. Suddenly the heavens were opened, and He saw the Spirit of God descending like a dove and resting on Him.
And a voice from heaven said, “This is My beloved Son, in whom I am well pleased!”