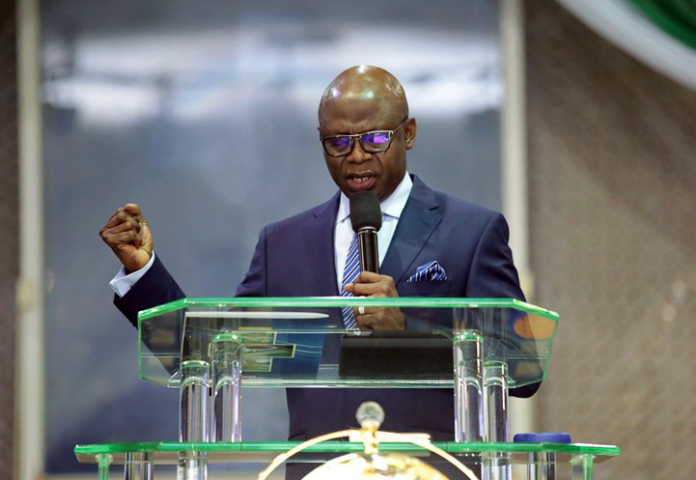 Dr. Tunde Bakare is a Nigerian Prophetic-Apostolic pastor and the President of Latter Rain Ministries, Inc. He has received national and international attention for his televangelism, which has sometimes been critical of the Nigerian government.

Tunde Bakare was born in Abeokuta (Ogun State, Nigeria) on November 11, 1954. He attended All Saints Primary School, Kemta, Abeokuta and subsequently Lisabi Grammar School, Abeokuta, after which he studied law at the University of Lagos between 1977 and 1980. He was called to the Bar in 1981 and following his NYSC, he practiced law with Gani Fawehinmi Chambers, Rotimi Williams & Co and Burke & Co, Solicitors.

He established his own law firm Tunde Bakare & Co (El-Shaddai Chambers) in October 1984. In May 1988, at the peak of his legal career he was called into ministry and he founded The Latter Rain Assembly (End-Time Church) on April 1, 1989 and is currently the Serving Overseer of the church.

Nigeria Church Leaders And Their Years In Ministry

Pastor (Dr.) Tunde Bakare was born to a Muslim mother and a Muslim father, whom he did not grow up to know. His mother, Madam Abigail Eebudola Bakare raised him.

Married to Mrs. Olayide Bakare in 1984, Pastor Bakare’s marriage has played a pivotal role in his life, career and ministry. “Mrs. B”, as she is affectionately called by her husband, has been involved in ministry work all her adult life. Pastor and Mrs. Bakare have raised two girls and three boys in their over thirty years of marriage.

He was formerly a pastor at the Deeper Life Bible Church before he left to join the Redeemed Christian Church of God which he soon left to start his own.

He presides over Global Apostolic Impact Network (GAIN) – a network of churches, ministries and kingdom businesses committed to advancing the Kingdom of God on earth. Dr. Bakare is also the President of Latter Rain Ministries, Inc. (Church Development Center) in Atlanta, GA, USA, a ministry committed to restoring today’s church to the scriptural pattern. In recognition of his years of exploits and global impact in ministry, he was honoured with a Doctor of Ministry degree by the Indiana Christian University under the leadership of his mentor, Dr. Lester Sumrall in 1996.

As part of his endeavour to give back to humanity, Bakare established The Family Heritage Foundation that gives scholarship to less privileged students from all walks of life within and outside the country.

In 2007, he established the International Centre for Reconstruction and Development (ICRD); a knowledge industry/think-tank devoted to re-engineering the social, economic and political landscape of Nigeria in particular and Africa in general.

I Was Disowned By Parents For Leaving Jehovah Witness To Christianity

Dr. ‘Tunde Bakare is the Convener of the Save Nigeria Group (SNG); a coalition of pro-democracy groups and individuals with a clear mandate to promote political knowledge and participation of the Nigerian citizens through strategic activities. After decades of speaking truth to power and standing on the side of the oppressed, Dr. Bakare has extended the frontiers of his political involvement in a bid to Save Nigeria, to Change Nigeria and to Make Nigeria Great again.

His persuasion: “I’m fully persuaded that I will live long in health; having long life in health, with wealth for the purpose for which He created me to be a blessing to humanity”. This persuasion invariably affects and informs his thought patterns, decision making process and choices in life.

His conviction: “God will not justify the wicked, He will not forsake the righteous; the wickedness of a wicked man will fall upon his head and the righteousness of a righteous man will answer for him in the days to come”.

His passion: “To see that the true perspective of the gospel of Jesus Christ is given to people without any contamination or mixture” and “To see a Nigeria that works in his lifetime”.

His Legacy: “My legacy? The grace to pray through”. Surprisingly, Pastor Bakare initially as a young Christian did not have a flare or desire to pray, but according to him, circumstances in his marriage as orchestrated by God taught him not only how to pray but also how to pray through.

Secret of his success: Obedience only to the word and instructions of God. Sandwiched between his willingness and desire to do the will of God is obedience even when all things are working contrary to the word of God.