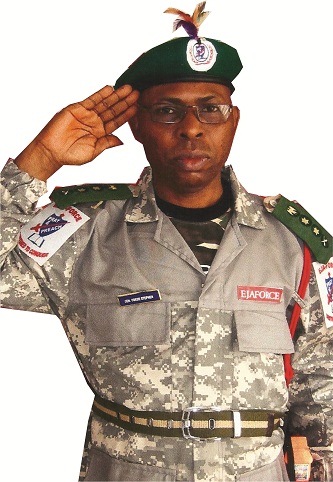 Rev. Odede Stephen Ebimene is the founding Pastor and General Overseer of Liberation Power Ministries (Endtime Jesus Army) also known as EJA FORCE with headquarters in Port Harcourt, Rivers State, Nigeria.
He was born in 15th December, 1955 and also grew up in a town called Isampou in Ekeremor Local Government Area of Bayelsa State, Nigeria.  This is also the birth place of his mother Ogoibiri.  His father Dudu Tuaboboh was born in 1928 in his home town Ebedebiri in Sagbama Local Government Area of Bayelsa, State in Nigeria.  He died in 1970.
Rev. Odede Stephen is from the Niger Delta Area of Nigeria.  He attended his primary school in Isampou from 1963 to 1969 in St. Luke’s Primary School, a Missionary School.  Because of the problem of sponsorship he could not make headway until 1973 when he got admitted into Government Secondary School in Amassoma in Southern Ijaw Local Government Area of Bayelsa State in Nigeria and got his West African School Certificate (WASE) in 1977.
Rev. Odede Stephen got employed as a Fisheries Assistant in Training into the Rivers State Ministry of Agriculture and Natural Resources in 1977 and was sent as an in-service trainee to do a Diploma Course in general fisheries in the then Rivers State School of Fisheries at Onne from 1977 to 1979 and got Ordinary National Diploma Certificate in Fisheries (OND) fisheries.   In 1982, he got admission into the Federal Fisheries School under the Nigerian Institute for Oceanography and Marine Research in Victoria Island, Lagos, Nigeria to do an advanced course in fisheries while still in service.  In 1985 he came out with a Higher National Diploma (HND) Certificate in Fisheries and worked with the Ministry of Agriculture Fisheries and Natural Resources in Rivers State and Bayelsa State as a Senior Fisheries Superintendent in March, 1998 and voluntarily retired to answer the call to full time service and to face the work as a Gospel Minister and started his Ministry in November, 1996.

CHRISTIAN EXPERIENCES.
Rev. Odede Stephen started with the St. Luke’s Anglican Church in his home town, Isampou and became born-again in 1978.  He continued in the Anglican church and was confirmed in St. Cyprians Anglican church, Port Harcourt by Late Bishop Fubara in 1978.  He joined the Anglican Adam’s Preaching Society with Headquarters in Delta State.  He continued with the crusades, planting churches through the AAPS (Anglican Adam’s Preaching Society) for many years speaking for the people to make peace with God their creator.
In 1982, Rev. Odede Stephen came into contact with Deeper Christian Life Ministry and joined this Bible Teaching Ministry from where he grew in the scriptures and deeper Christian experiences.
He started as a member of the Zonal Prayer Team in 1986 after his National Youth Service and later became a House Leader (Home Cell Leader).  By his commitment and consecration, he was made an Area Leader and later Zonal Leader and later in 1991 he was appointed as a District Pastor of one of the Districts of Deeper Christian Life Ministry in Port Harcourt.
He served as a District Pastor and co-ordinator in Deeper Christian Life Ministry for 6years and resigned to answer God’s call to start his own ministry in November, 1996 where he is the Founding/Senior Pastor and the General Overseer till date.
His calling is Primarily Deliverance and Spiritual Warfare. Rev. Odede Stephen is a seasoned Bible teacher, a spiritual warfare strategist anointed with an uncommon anointing for grassroots deliverance.  He is a Revivalist and Conference Speaker.  He is the host of a weekly network Television Programme in Rivers State of Nigeria with the N.T.A (Nigeria Television Authority) in Port Harcourt. He is also the Host of Ejaforce Time, a weekly Radio Programme also in Rivers State with Today FM 95.1.
Through these T.V/Radio programmes, thousands are blessed weekly and brought into the kingdom of God.
The church that started in November, 1996 with 66 worshippers is now numbering well over 3,000 (three thousand) worshippers in 2015.  Through dynamic preaching, miracle producing prayers and Satan conquering deliverance ministrations, Rev. Odede Stephen meets the needs of thousands of people on daily basis both within the church and outside.

He is the author of at least nine published books to his credit.

As a spiritual warfare strategist given to sound spiritual warfare operations and as the General Officer Commanding this Special Army of the Lord called EJA FORCE, Rev. Odede Stephen opened a Christian Military School to train and produce Demon Chasers, Fire Producers and Mountain Levelers to set the captives free and to keep the devil where he rightly belongs.  This school which started in January 2001 is called EJA SCHOOL OF DELIVERANCE. He is the President of the School.
In pursuit of his spiritual warfare operations, he holds an annual War Conference in September and has done this for about 18 years now.
During this Conference, seasoned Spiritual Warfare Ministers are invited as conference speakers to –
i)          Create awareness in the Christians and the Church world of the battles going on between the forces of darkness and the armies of God – Jehovah, the Man of War.
ii)         To train Christians biblical methods to fight and easily conquer the devil and set the captives free.
iii)       To create opportunities for people to receive solutions to problems   brought upon them by the devil and lots more.
He also holds a weekly programme which is also on TV for people who are looking for the fruit of the womb.  This programme is titled: FREEDOM MATERNITY. He tackles this problems through deliverance and spiritual warfare every Wednesday for families to enjoy the fruit of the womb.
He has also established a special unit in the Church for the Widows, Orphans and the less privileged or needy. Through this unit, both cash and kind (materials) are distributed to the people in need at least twice annually.
Rev. Odede Stephen has a number of boys and girls in his scholarship list both from his community and outside his community to the tone of about 10 whom he trains to University level of the people whose parents could not afford them such opportunities.

FAMILY AND DOMESTIC LIFE.
Rev. Odede Stephen is married to Rev.Dr. Scholar Odede, who is a dynamic Minister of the gospel,  A seminarian, A public teacher and Peace maker.
She holds a Bachelor/ Masters Degrees in Management Science from university of Port Harcourt, Nigeria.  She is from Imo State of Nigeria.
They are blessed with 4 vibrant children – Faith, Precious, Gracious and Deborah.  They live humble but disciplined lives and are committed to their calling.
Rev. Odede Stephen is presently living in Port Harcourt, Rivers State, Nigeria with his family pursuing his course to put a smile in people’s lives.