See All of Apostle Johnson Suleman 2019 Prophecies Below:

(1) Great agricultural boost for South Africa
(2) I saw an eclipse
(3) 2019 Nigeria election- 100% rigged
(4) Northern response to election results to shock the incumbent Government.  They had strong response from the south.
(5) Election- Nigeria vs Military/ Police
(6) China to openly confront America
(7) Great set back economically
(8) Election funds controversy/scandal
(9)  Biafra struggle to gain massive support
(10) A new activist to launch campaign against presidency
(11)  2019, a shock for Governors
( 12)  Ghana economy to get foreign support
(13)  I saw another missile test in North Korea
(14)  Nollywood to merge internationally
(15)  I see a major breakthrough in the cure for HIV
(16)  Muhammadu Buhari needs prayer,  please sir , go and rest
(17) Abubakar Atiku should focus on North during campaign
(18)  I see an Igbo Presidency in 2023 but they must not have any deal with present Government

Recommended: All 2019 Prophecies For Nigeria, Ghana, Kenya, USA, Others

(19)  Tinubu should forget 2023
(20)  I see internet fraudsters, new ritualistic ways of making money( blood hunt)
(21)  A presidential aspirant to be arrested
(22)  I saw Boko Haram invade a police station
(23)  The Almighty God is unhappy at the continued detention of El- Kazakh
(24) APC wins Lagos election
(25)  Keystone banks needs prayers
(26)  ASUU to pray against losing a top member
(27) I saw a major politician declared missing
(28)  WAEC to be re-modeled
(29)  I saw farmers package welfare from the government and it results to crisis between  them and the state government
(30)  I saw most Eastern states won by APC at the National level
( 31)  Strange killings in Togo
(32)  Mali should pray against strange virus outbreak
(33)  The Government should protect police station and military barracks because I see people break in searching for arms
(34)  I saw fire outbreak in a media house
(35)  I saw a Nigerian airline grounded totally
(36)  America should not relax a deadlier terrorist group is emerging
(37)  I saw a probe group disgrace U.S government
(38)  Donald Trump to lose 2nd term

Recommended: 2019 Theme (Year Of) For All Churches In Nigeria

(39)  Brexit crises to implode U.K
(40)  I saw a terrorist attack in America
(41)  Fire outbreak in Canada but quickly managed
(42)  Nigeria to win awards and relevance in cyber world
( 43) Let’s declare a prayer day against  massive bloodshed in Rivers state ( Too ugly)
(44)  I saw a horse, written on it was ‘ pray against Americans being homeless. I saw something happen  that made them scampering for safety. Natural disaster
(45)  July and August in Nigeria,  serious prayer.
(46)  Many weddings, 2019 is a year of multiple marriages
(47)  I saw people with children in multiples of triplets and twins
(48)  Pensioners to smile
(49)  I saw a lot of politicians in Prison
(50)   A top legislator in USA and a known senator- peaceful passing away 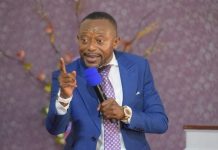 Pakistani Soldiers Demolish Christian Home, Say They Are Not Allowed To...