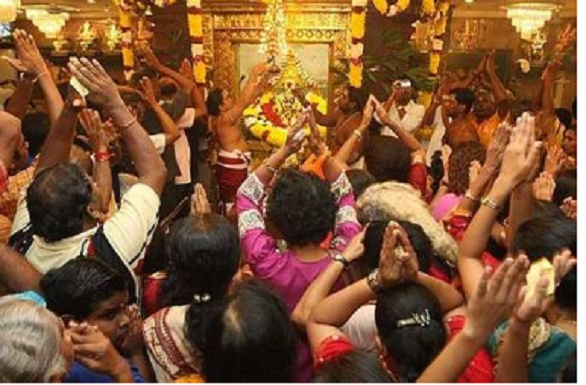 While pastoring a group of 40 new believers in an extremely poor, predominantly Hindu region in northern India, the unthinkable but increasingly ‘normal’ happened: militants viciously attacked a young pastor and his church meeting secretly in a believer’s home. Pastor Kumar and three others were rushed to hospital in critical condition, the leader bloodied, unconscious, and not expected to live.

In the week after the attack, other church members living in fear for their lives were out walking one day and reported seeing an amazing vision in the sky. It appeared to be a warrior angel, they said, moving and dancing, and helped displace their dread with courage. Local Hindus who witnessed the sight became less hostile to the believers. Previously enraged whenever they saw believers gather, many even began joining them to worship secretly.

About two weeks ago, the three injured members were released, but Pastor Kumar continued to need further treatment. He had already had several surgeries, one a major procedure on his back after which doctors were uncertain he would be able to stand, let alone walk again. More prayers, and he was soon up and about! His doctors could not deny a miracle had happened.

He was to have been discharged from the hospital last Friday (Nov. 9). Again, however, he developed unusual pain in his back. When an x-ray showed yet another injury to his backbone, doctors suggested one more surgery. Without surgery, they warned, he would likely be seriously affected the rest of his life.

Yet Pastor Kumar knew his Lord could heal him. He so strongly believed this he told the attending doctors that the Lord Jesus will not only reduce his pain, but would, by the prayers of His children, heal him completely. He then shared his testimony and other experiences with the Lord.

The GP and surgeon found themselves listening respectfully and intently to their strange patient, even though they—with practically all in the hospital—are fundamentalist Hindu.

They decided they would wait and do another x-ray the next morning … so of course Pastor Paul, on learning this, sent out a prayer alert.

“Let them believe Jesus is Lord and mighty healer,” he encouraged prayer warriors. “We believe our Lord will not allow His children to be ashamed before gentiles and scoffers.”

The next day, doctors were dumbfounded to see no injuries. ‘Might something have gone askew with their x-ray machine?’ they likely wondered.

“Without a doubt, it is my Lord’s mighty work,” Pastor Kumar assured them. “Trust Him for He is your Lord too. Accept Him, then you will see many, many wonders.” Empty of arguments, they still decided to wait and do one more test the next day.

When Friday morning’s x-ray showed the same thing, the doctors had to relent. “It is a great miracle from your Lord,” they admitted. “We now believe His wonderful works.”

“Can you arrange a meeting for me in the hospital with your staff?” Pastor Kumar boldly requested.  “I would like to share my story with them.”

They would have to check with hospital authorities, the doctors responded, but if the higher-ups agreed, a meeting would be organized.

Around noon, Pastor Kumar got the word that a meeting had been announced for two that afternoon.  He immediately contacted Pastor Paul and Pastor Peter Haneef for prayers. He and a visiting church member then knelt by his hospital bed in earnest prayer for the next two hours, neglecting their noonday meals. They then headed directly to the conference hall.

More than 500 people—nurses, nursing students, doctors and other staff—sat waiting to find out why they had been called. Almost all were Hindus.

Pastor Kumar’s attending surgeon introduced him.  The pastor began with a song only he and his visitor knew the words to, then a prayer.

He shared of his upbringing, his conversion from Hinduism, and followed with a powerful presentation of the gospel. A pin drop would have echoed through the auditorium.  As he wrapped up, the Holy Spirit guided him to go further.

“Please stand if you are really willing to accept this Jesus as your Lord and Savior.” Everyone looked around at each other, but no one stood.

So he repeated the question. Then, a young woman sitting in the front row raised her hand and rose to her feet.  Slowly, one-by-one, all did the same: doctors, nurses, administrative staff—absolutely everyone in attendance.

The pastor asked them to close their eyes, lay both their hands on their chests, and to accept Jesus into their hearts and to say it out loud.

“Because, if you confess with your mouth that Jesus is Lord and believe in your heart that God raised him from the dead, you will be saved.” (Rom. 10:9)

He had explained enough so that each, in their own words, replied along the lines of:
“I accept Christ Jesus, the only begotten Son of the Heavenly Father as my Lord and my Savior.  Lord Jesus came down from heaven and was crucified on the cross of Calvary, died and rose from the dead to give me salvation and eternal life. I believe in Him and accept Him as my Lord and Savior.”

Pastor Kumar then prayed for them. One of the doctors rose to thank him, tears in his eyes. He pronounced the moment overwhelmingly great and joyful for him.

“From now onwards I will not worship any idols and will worship Jesus alone.” He thanked him profusely again.

When the meeting ended about 4:30, everyone came forward asking if they could be given bibles. Of course he had none on hand, but we are praying the resources will come in to provide this exciting new ministry with all the bibles they need.

Pastor Kumar was then discharged from the hospital, and returned to his home and family this morning.

Please keep this new and growing ministry in your hearts and prayers. Without your support, none of this would be possible.

India is ranked 10th on persecution watchdog, Open Doors’ 2019 World Watch List of the countries where it is most difficult to be a Christian. The country was 31st in 2013, but its position has been worse each year since Narendra Modi of the Bharatiya Janata Party came to power in 2014.