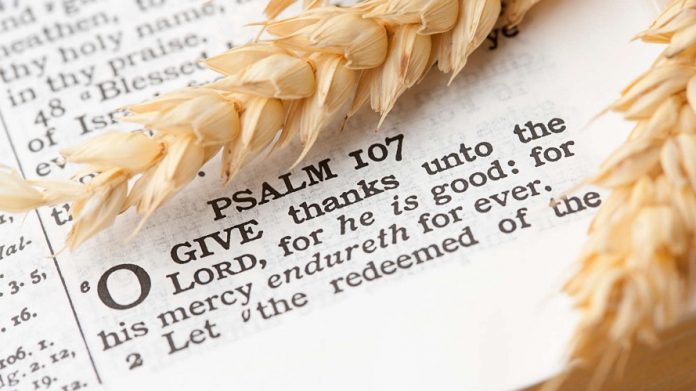 Come Thanksgiving Day each year, many of us give the nod to Pilgrims and Indians and talk of making ready for a harsh first winter in the New World.

But for the Christian, the deepest roots of our thanksgiving go back to the Old World, way back before the Pilgrims, to a story as old as creation, with a two-millennia-old climax. It’s a story that keeps going right on into the present and gives meaning to our little lives, even when we’re a half a globe removed from history’s ground zero at a place called Golgotha.

Origin of Yearly Thanksgiving In America

Here’s the true story of thanksgiving in four stages.

“God created humanity for gratitude. You exist to appreciate God.”

First, God created humanity for gratitude. You exist to appreciate God. He created you to honor him by giving him thanks. Appreciating both who God is and his actions for us — in creating us and sustaining our lives — is fundamental to proper human life in God’s created world.

As he describes in Romans 1 what’s gone wrong with the world, the apostle Paul gives us this glimpse of the place of appreciation in the created order:

Although they knew God, they did not honor him as God or give thanks to him, but they became futile in their thinking, and their foolish hearts were darkened. (Romans 1:21)

Humanity was created to appreciate God. But as we’ve already seen from Romans 1, ingratitude wasn’t far away.

Second, we all have failed miserably in appreciating God as we should. In her book on gratitude, Ann Voskamp gives memorable expression to the failure of the first man and woman — and the devil before them — to rightly experience and express gratitude.

From all of our beginnings, we keep reliving the Garden story.

Satan, he wanted more. More power, more glory. Ultimately, in his essence, Satan is an ingrate. And he sinks his venom into the heart of Eden. Satan’s sin becomes the first sin of all humanity: the sin of ingratitude. Adam and Eve are, simply, painfully ungrateful for what God gave.

Isn’t that the catalyst of all my sin?

Our fall was, has always been, and always will be, that we aren’t satisfied in God and what He gives. We hunger for something more, something other.

Satan the ingrate spawns unthankfulness in Adam and Eve, who pass it along to all of us. Both before our conversion and after, we are unthankful people. This is so painfully true.

“Our fall was, and has always been, that we aren’t satisfied in God and what he gives. We hunger for something more.”

And we not only fail to be thankful like we ought, but we also fail to get the balance right between physical and spiritual. Two obstacles often stand in our way to God-exalting gratitude. You could call them “hyperspirituality” and “hyperphysicality.”

Perhaps hyperphysicality is all too well known in 21st-century Western society at large. A milieu of materialists is so unaware of spiritual reality that even when there is gratitude for the physical, the spiritual is neglected, if not outright rejected. We can be thankful for the temporal, even while we couldn’t care less about the eternal.

But hyperspirituality is often particularly dangerous among the so-called “spiritual” types, even in the church. We can be prone to mute God’s physical goodness to us out of fear that appreciation for such would somehow detract from our thanksgiving for spiritual blessings.

In our sin, we fail again and again to get the proportions right. Only with divine redemption are we able to grow toward a balance that goes something like this: Christians are thankful for all God’s gifts, especially his eternal gifts, and especially the surpassing value of knowing his Son (Philippians 3:8), the Spirit-become-physical.

Third, God himself, in the person of his Son, Jesus, entered into our thankless world, lived in flawless appreciation of his Father, and died on our behalf for our chronic ingratitude. It is Jesus, the God-man, who has manifested the perfect life of thankfulness. If you’ve ever tracked the texts where Jesus gives his Father thanks, you’ll know it’s quite an impressive list.

Matthew 11:25 [also Luke 10:21]: “At that time [note the context of unrepentant and unthankful “cities where most of his mighty works had been done,” verse 20] Jesus declared, ‘I thank you, Father, Lord of heaven and earth, that you have hidden these things from the wise and understanding and revealed them to little children; yes, Father, for such was your gracious will.’”

Matthew 15:36 [also Mark 8:6]: Jesus “took the seven loaves and the fish, and having given thanks he broke them and gave them to the disciples . . . ” [See also John 6:11 and John 6:23 which refer to the location as “the place where they had eaten the bread after the Lord had given thanks.”]

List Of Names In The Bible & Meaning From A To Z

Luke 22:17–20 [also Matthew 26:27 and Mark 14:23]: “He took a cup, and when he had given thanks he said, ‘Take this, and divide it among yourselves. For I tell you that from now on I will not drink of the fruit of the vine until the kingdom of God comes.’ And he took bread, and when he had given thanks, he broke it and gave it to them, saying, ‘This is my body, which is given for you. Do this in remembrance of me.’ And likewise the cup after they had eaten, saying, ‘This cup that is poured out for you is the new covenant in my blood.’” [And so following Jesus’s pattern, Paul in Acts 27:35 “took bread, and giving thanks to God in the presence of all he broke it . . . ”]

Jesus is not only God himself but also the quintessentially thankful human. The God-man not only died to forgive our failures in giving God the thanks he’s due, but also lived the perfect life of appreciation on our behalf toward his Father.

“Christians are thankful for all God’s gifts, especially his eternal gifts.”

Chinese Christians Weep, Rejoice and Cry For Joy On Receiving The Bible (Video)

Finally, by faith in Jesus, we are redeemed from ingratitude and its just eternal penalty in hell, and freed to enjoy the pleasure of being doubly thankful for God’s favor toward us — not only as his creatures, but also as his redeemed.

It is fitting for a creature to be in a continuous posture of gratitude toward his Creator. And it is even more fitting for a redeemed rebel to be in an ongoing posture of gratitude toward his Redeemer. The kind of life that flows from such amazing grace is the life of continual thankfulness. This is the kind of life in which the born-again Christian is being continually renewed, progressively being made more like Jesus.

And so the apostle Paul encourages Christians to have lives characterized by thanksgiving.

Colossians 1:11–12: May you be “strengthened with all power, according to his glorious might, for all endurance and patience with joy, giving thanks to the Father, who has qualified you to share in the inheritance of the saints in light.”

Colossians 2:6–7: “as you received Christ Jesus the Lord, so walk in him, rooted and built up in him and established in the faith, just as you were taught, abounding in thanksgiving.”

Colossians 3:15–17 [note the hat trick (3x) in this one text]: “And let the peace of Christ rule in your hearts, to which indeed you were called in one body. And be thankful. Let the word of Christ dwell in you richly, teaching and admonishing one another in all wisdom, singing psalms and hymns and spiritual songs, with thankfulness in your hearts to God. And whatever you do, in word or deed, do everything in the name of the Lord Jesus, giving thanks to God the Father through him.”

Ephesians 5:20: “ . . . giving thanks always and for everything to God the Father in the name of our Lord Jesus Christ.”

First Thessalonians 5:18: “Give thanks in all circumstances; for this is the will of God in Christ Jesus for you.”

Only in Jesus, the paragon of creaturely appreciation, are we able to become the kind of persistently thankful people God created us to be and fulfill the human destiny of thanksgiving. For the Christian, with both feet standing firmly in the good news of Jesus, there are possibilities for a true thanksgiving which we otherwise would never know.

Complete List of Apostle Paul’s Prayers In The Bible