A Christmas tree is a decorated tree, usually an evergreen conifer such as spruce, pine, or fir or an artificial tree of similar appearance, associated with the celebration of Christmas.

The evergreen fir tree has traditionally been used to celebrate winter festivals (pagan and Christian) for thousands of years. Pagans used branches of it to decorate their homes during the winter solstice, as it made them think of the spring to come. The Romans used Fir Trees to decorate their temples at the festival of Saturnalia. Christians use it as a sign of everlasting life with God.

The modern Christmas tree was developed in early modern Germany (where it is today called Weihnachtsbaum or Christbaum) with predecessors that can be traced to the 16th and possibly 15th century, in which devout Christians brought decorated trees into their homes. It acquired popularity beyond Germany during the second half of the 19th century, at first among the upper classes.

The tree was traditionally decorated with edibles such as apples, nuts, or other foods. In the 18th century, it began to be illuminated by candles which were ultimately replaced by Christmas lights after the advent of electrification.

Today, there is a wide variety of traditional ornaments, such as garlands, baubles, tinsel, and candy canes. An angel or star might be placed at the top of the tree to represent the archangel Gabriel or the Star of Bethlehem from the Nativity. Edible items such as Gingerbread, Chocolate and other sweets are also popular, and are tied to or hung from the tree’s branches with ribbons.

The Christmas tree has also been known as the “Yule-tree”, especially in discussions of its folkloric origins

See Why Christmas Is Always Celebrated On The 25th December

According to the Encyclopædia Britannica, “The use of evergreen trees, wreaths, and garlands to symbolize eternal life was a custom of the ancient Egyptians, Chinese, and Hebrews. Tree worship was common among the pagan Europeans and survived their conversion to Christianity in the Scandinavian customs of decorating the house and barn with evergreens at the New Year to scare away the devil and of setting up a tree for the birds during Christmastime.”

During the Roman mid-winter festival of Saturnalia, houses were decorated with wreaths of evergreen plants, along with other antecedent customs now associated with Christmas.

The modern Christmas tree is frequently traced to the symbolism of trees in pre-Christian winter rites, wherein Viking and Saxon worshiped trees. The story of Saint Boniface cutting down Donar’s Oak illustrates the pagan practices in 8th century among the Germans. A later folk version of the story adds the detail that an evergreen tree grew in place of the felled oak, telling them about how its triangular shape reminds humanity of theTrinity and how it points to heaven.

Alternatively, it is identified with the “tree of paradise” of medieval mystery plays that were given on 24 December, the commemoration and name day of Adam and Eve in various countries. In such plays, a tree decorated with apples (to represent the forbidden fruit) and wafers (to represent the Eucharist and redemption) was used as a setting for the play. Like the Christmas crib, the Paradise tree was later placed in homes. The apples were replaced by round objects such as shiny red balls.

Modern Christmas trees originated during the Renaissance of early modern Germany. Its 16th-century origins are sometimes associated with Protestant Christian reformer Martin Luther who is said to have first added lighted candles to an evergreen tree.

The first recorded Christmas tree can be found on the keystone sculpture of a private home in Turckheim, France dating 1576. 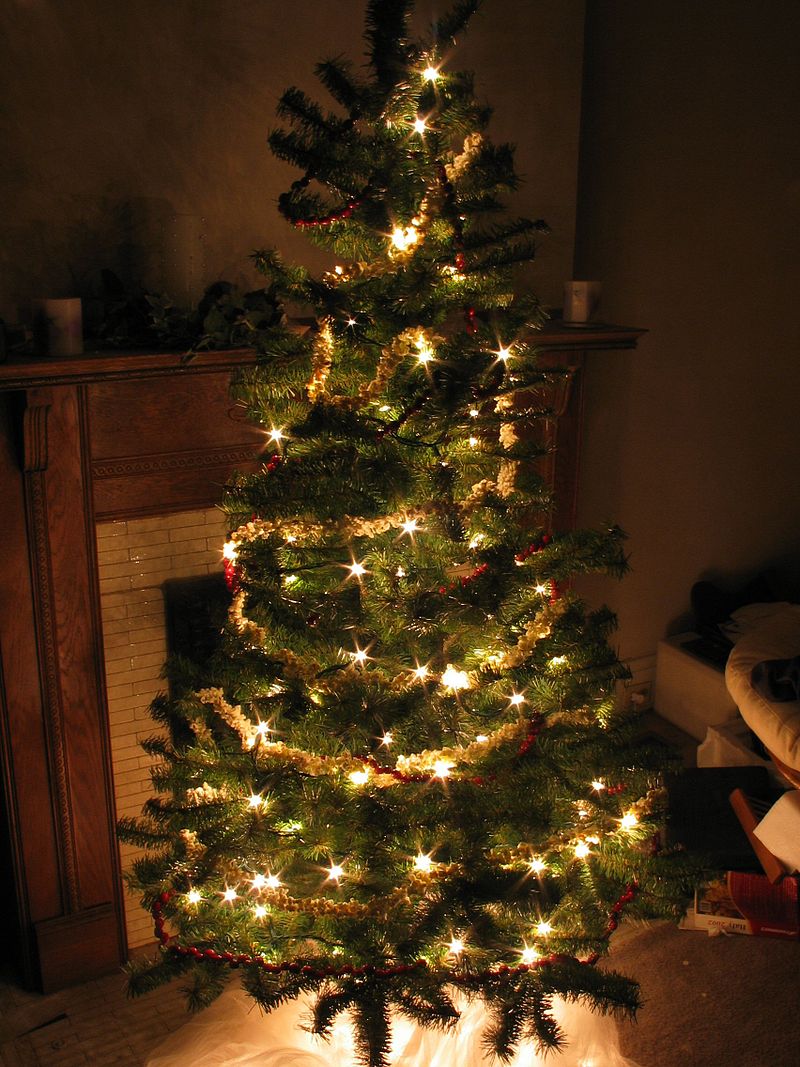