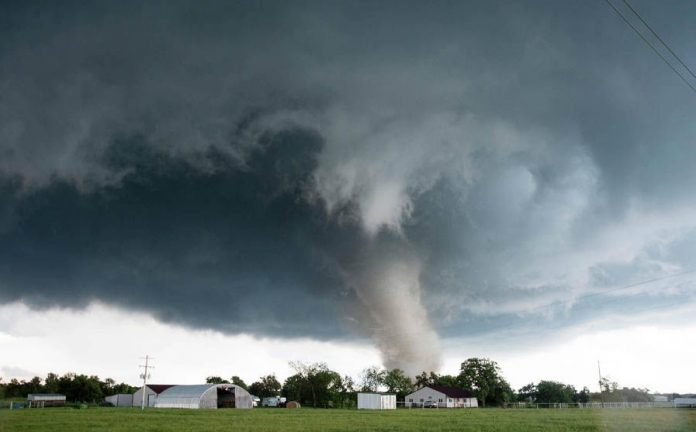 An incredible video has emerged of tornado being stopped in the name of Jesus Christ.

In a small village in Philippines, the Christians prayed in Jesus Name to stop a tornado from crossing their village and it stopped.

There Is Power In The Name Of Jesus.

Watch the Video Below:

See Also: Jesus Appears Amid Dust Storm To Islamic Militants Hunting Christians, Asks ‘Why Do You Persecute Me?’

This is similar to an account in Mark 4:37-39 when Jesus Christ stopped a raging storm. The wild storm came up, waves crashed over the boat, it was about to sink, and Jesus was in the back, sleeping on a cushion. The disciples woke Him up. They said, “Master! Don’t you care if we drown?” Jesus got up and ordered the wind to stop. He said to the waves, “Quiet! Be still!” Then the wind died down. And it was completely calm.

Mark 4:37-39.
37 And there arose a great storm of wind, and the waves beat into the ship, so that it was now full.
38 And he was in the hinder part of the ship, asleep on a pillow: and they awake him, and say unto him, Master, carest thou not that we perish?
39 And he arose, and rebuked the wind, and said unto the sea, Peace, be still. And the wind ceased, and there was a great calm.

Super Typhoon Haiyan, one of the strongest storms ever recorded, made landfall in the Philippines on Friday, November 8. The storm had maximum sustained winds of 315 kph (195 mph) and gusts as strong as 380 kph (235 mph), officials said. That wind strength puts it well above the 252 kph (157 mph) threshold for a Category 5 hurricane, the highest category on the Saffir-Simpson hurricane wind scale.

Tornadoes can lift cars, mobile homes and animals into the air.

On average, tornadoes travel at around 10-20 miles per hour.

The average Michigan tornado is on the ground less than 10 minutes and travels a distance of 5 miles. However, they do not always follow the norm, and have been known to stay in the ground for more than an hour and travel more than 100 miles.

The most destructive and deadly tornadoes occur from supercells, which are rotating thunderstorms with a well-defined radar circulation called a mesocyclone. Supercells can also produce damaging hail, severe non-tornadic winds, unusually frequent lightning, and flash floods.

A tornado over a body of water is called a “waterspout.”
The United States has the highest number of tornado occurrences in the world with an average of more than 1,000 tornadoes reported each year.