“I was exposed to some Hindu and Buddhist literature, I got to realize that there is a spiritual reality, but that spiritual reality that I saw was very very scary—it is negative, it was dark—but it was very real.”

The story of Dr. Erez Soref (President of ONE FOR ISRAEL), a Jewish Psychologist who grow up in Israel and ironically never heard anything about Jesus! His spiritual life journey will give you a unique insight into Israel & Jesus!!! See more of our stories on our website or on our YouTube page!

In this Jewish testimonial video, Israeli psychologist, Dr. Erez Soref shares how he discovered Jesus for the first time, and reveals how Jesus the Messiah remains the best kept secret of the Jewish people.

Erez grew up in a traditional Israeli household, attending Synagogue every week and studying the Old Testament all the way from 1st to 12th grade, but to him, God felt distant, as all of the teachings were applied more as the general history of the Jewish people, rather than a spiritual one. After his tour in the IDF, Erez left for southeast Asia on the “Mysticism” trail, wanting to better understand spirituality.

“I was exposed to some Hindu and Buddhist literature, I got to realize that there is a spiritual reality, but that spiritual reality that I saw was very very scary—it is negative, it was dark—but it was very real.”

Erez fell on hard times, finding himself in Amsterdam selling merchandise to make ends meet. It was there however, that he met a group of enthusiastic Christians, who asked why he didn’t believe in Jesus, as Jesus himself was Jewish. Erez found himself drawn to the group, curious about their idea of a personal relationship with God, and their knowledge of the Hebrew scriptures that even he was unfamiliar with.

His encounter urged him to reread the Hebrew Scriptures, and to his surprise, he found these “hidden” Messianic verses within his Hebrew bible, skipped over by his teachers throughout his life. After much trepidation, he began to read the New Testament, and found himself utterly surprised; he has never heard anything about Jesus or his teachings, despite growing up in Israel.

This revelation led Erez to compare the traits of the Messiah listed in prophecy to the fulfillment of these traits by Yeshua in the New Testament, and found them to match up completely.

“I became convinced, first in my head, and then in my heart, that Yeshua is indeed the promised Messiah of our people.”

Erez was filled with a great passion for knowledge about Jesus and the New Testament, and felt that he was being called to finally return to Israel, to share this great discovery with his friends, family, and to anyone who would listen.

“Yeshua is not just the Messiah of the Gentiles, he’s also our Messiah.”

Erez returned with a new joy in his heart, even with the resistance from his family. He saw that he was not the only one who had made this discovery, and began to attend a Messianic service in Israel. However, when asking if there was a place or a college, he could visit to further study the scriptures, he soon learned that, as far as anyone knew, no such Bible college existed.

Erez felt that he was called to change that, and has worked tirelessly since then to provide the opportunity to Israelis—both Jewish and Arab—to study the Bible, in Hebrew where it happened so many years ago. 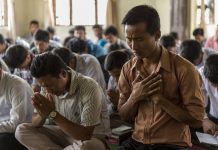 2021: Christianity Thrives In Nepal Amid Trials And Tribulations