After Jewish Jonathan Cahn has a life-changing revelation about Jesus, he makes a deal with God… and almost dies! Hear his story of how he transformed from an Atheist Jew to a Messianic Jewish Rabbi.

Jonathan Cahn is a Messianic Jewish pastor whose novel The Harbinger compares the United States and the September 11 attacks to ancient Israel and the destruction of the Kingdom of Israel. Cahn has followed up with 3 other books – The Mystery of the Shemitah, The Book of Mysteries, and The Paradigm.

Born in New York State, Cahn was raised in a Jewish home, the son of a holocaust refugee, and attended the synagogue frequently; at age 20 he had become a Messianic Jew, believing that Jesus was the Messiah.

Cahn is the head of the Beth Israel worship center (a messianic congregation) whose “liturgy focuses on Jesus as savior.” The group had been located in Garfield, New Jersey throughout the 1990s but moved to Wayne, New Jersey in 2008. Their arrival in Wayne was viewed with suspicion by local leaders of Judaism as “Messianism has been condemned by Jewish clergy and leaders as a cloak for Christian missionizing.” With the arrival of Cahn’s group the YM-YWHA of North Jersey held a counter-missionary event with a member of Jews for Judaism. Cahn told reporters that “the congregation has no intention of ‘targeting’ the Jewish community. However, anybody is welcome at the center.” 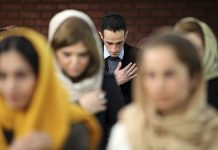