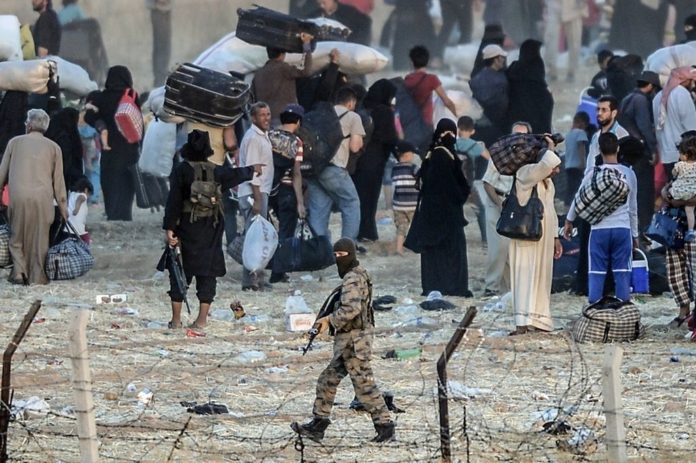 Christians in Burkina Faso are being forced to “flee, convert or die” by Islamic jihadists.

Burkina Faso’s government said on Monday that suspected extremists have carried out two attacks killing a total of 29 people.

One attack Sunday on the Dablo-Delbo road killed at least 14 civilians, while another 15 people were killed when a truck hit an explosive device on the road between Barsalogho and Guendbila in Sanmatenga province.

Islamic extremist violence has increased this year in Burkina Faso’s north and east near its Mali border. Hundreds have been killed in the attacks and thousands have fled.

However, Christians have been especially targeted. In June, seven Christians were killed by jihadists in a targeted attack in the northern town of Bani. The victims were searched for “signs of Christianity,” such as Bibles or crosses, before they were killed.

“Not only do the governments of nations like Burkina Faso need to be more protective of Christians and other minorities, but the international community needs to take decisive measures to end international terrorist financing and cross boarder transfers of weapons and militants,” Clancy said.

Burkina Faso is a Muslim-majority nation, but has a significant Christian minority, making up around 10 to 20 percent of the population. Most of the Christians are Catholics, and the country has 3 archdioceses and 12 dioceses.

The West African country used to have relatively good interfaith relations, with Christians and Muslims living together in peace. Since 2015, the situation has changed significantly: Jihadist groups that were previously active in neighboring Mali have gradually infiltrated Burkina Faso, and attacks have been increasing.

According to the Barnabas Fund, at least 56 Christians were killed by jihadists in a series of attacks between April and June.

There are a variety of Islamist groups active in the country, including the Al-Qaeda-affiliated Jama’a Nusrat ul-Islam wa al-Muslimin, the Islamic State in the Greater Sahara, and the home-grown Ansaroul Islam.

While these groups attack state symbols like military targets, schools and healthcare facilities, their targets of choice have been Christian churches.

Churches have been attacked in Soum, Dablo, Toulfé and Zimtenga since April 2019, and the parish priest of Djibo, Father Joël Yougbaré, was kidnapped in March.

On August 4, militants killed three Christians in attacks on Protestant and Catholic churches in Tialboanga. The town is in the eastern Tapoa Province, sparking fears that the insurgency is spreading from the north.

“In countries like Burkina Faso and Niger, the modus operandi is to create an atmosphere of fear and to undermine any civil authority that might exist. Interreligious tensions are exacerbated to the point of violence. This will help undo the cultural and social fabric of societies and people will be forced to seek extreme measures in order to survive. Because Christians are in the minority, they are the easy and prime target as jihadists want to rid the world of all faiths except their own particular distortion of religion,” Clancy told Crux.

“The rise in jihadist terrorism across Africa has its roots in the collapse of Libya in 2011. With that and the battle experience gained by jihadist terrorists in places like Afghanistan, Syria and Iraq, there are now many trained, armed and motivated extremists able to spread fear and unrest through West Africa,” he said.

Last month, Bishop Laurent Dabiré of Dori, the president of the bishops’ conference of Burkina Faso and Niger, called on the global community to step in and help.

“If the world continues to do nothing, the result will be the elimination of the Christian presence,” he said in an appeal published Aug. 1 by Aid to the Church in Need.

“They’ve slowly moved into the interior of our country, attacking the army, civil structures and the people,” he said, speaking of the jihadist groups. “Today their main target appears to be Christians. I believe they are trying to trigger an interreligious conflict.”

The bishop blamed outside actors for supplying the jihadist groups.

“The weapons they are using were not made here in Africa,” Dabiré said. “They have rifles, machine guns and so much ammunition, more than the Burkina Faso army has at its disposal. When they come to the villages they shoot for hours. Who is supplying them with these resources? If they were not getting this support from outside, they would have to stop. That’s why I’m appealing to the international authorities. Whoever has the power to do so, may they put a stop to all this violence!”

Clancy told Crux that if the jihadist influence is not stopped in the region, then “poor countries with unstable and/or corrupt governments will easily become very dangerous places for the Christian faithful as well as for Muslims who are not aligned with the jihadist philosophy.”