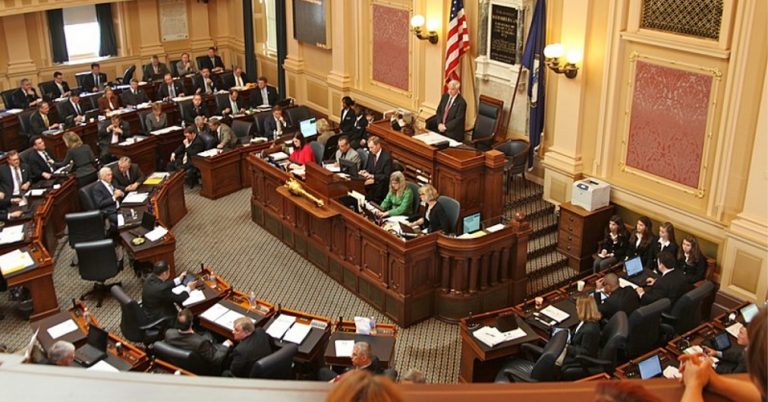 Democrats walked off the floor of the Virginia House of Delegates Tuesday after a pastor delivered an invocation urging them to protect the “unborn” and to uphold “biblical, traditional marriage.”

The six-minute prayer by Robert M. Grant Jr. of The Father’s Way Church in Warrenton, Va., eventually was cut off by House Speaker Eileen Filler-Corn, a Democrat, who gaveled the prayer to a close and began citing the Pledge of Allegiance.

“I pray that you may understand that all life is precious and worthy of a chance to be born, and God is a giver of life and people have no right or authority to take life,” Grant prayed. “The unborn has rights, and those rights need to be protected. They should never be denied the right to exist, the right to develop, or the right to have a family. The Word of God has given us a warning – woe to anyone who harms an innocent child. Every one of you sitting here today can guarantee these rights to these little innocent children of Virginia. … Please do not ignore their little voices. I pray for a heart change today.”

Grant further prayed that the chamber would uphold the “biblical, traditional marriage as God instructed the first man and the first woman in the Bible, that the two shall be one flesh, that a man and a woman shall be fruitful and multiply.”

“We should never rewrite what God has declared,” he prayed.

Grant, who is black, also touched on prison reform and questioned why “there so many abortion clinics near African American communities.”

“This is planned urban genocide – and you can change this,” he said.

‘All Life Is A Gift From God’: Trump

The Virginia Mercury reported that many Democrats walked off the floor during the sermon.

“It was totally disrespectful to all of us, all of us in this House,” said Del. Luke Torian, according to the Mercury.

One Democrat shouted, “Is this a prayer or a sermon?”

“I think that the statehouse belongs to all the citizens. And all the citizens have a voice,” Grant told reporters after the prayer, according to the Mercury. “If it’s my turn to have a voice, and I am a pastor, what do you expect from me? If you don’t want to hear what a pastor has to say, then don’t invite one.”

As he walked off, a man accompanying Grant asked a group of reporters if they were aware that “sodomy” was once considered an offense worthy of capital punishment. He declined to give his name.

Guests delivering the opening prayers — which are usually nonpolitical and encompass a variety of religious faiths — are typically invited to send in the text of their remarks beforehand.That did not happen with Tuesday’s prayer, according to House officials.