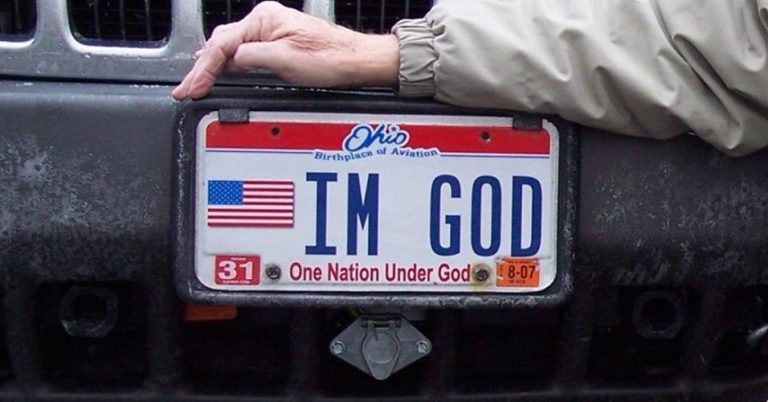 A federal judge this week ordered Kentucky to pay an atheist man more than $150,000 in attorneys’ fees after the state denied his request for a personalized license plate reading, “IM GOD.”

The state argued it had a legitimate government interest in “promot[ing] highway safety” by denying the plate because “potentially controversial messages . . . could lead to confrontation or distraction on its highways.”

But in his Nov. 13 ruling, Tatenhove wrote, “Vanity plates are private speech protected by the First Amendment.” The state, he noted, had permitted plates stating “IM4GOD” and “LUVGOD” but denied the request by plaintiff Ben Hart for an “IM GOD” plate. Therefore, he argued, the state’s position was not viewpoint neutral.

Hart is a self-described atheist and “freethinker,” and was represented by the Freedom From Religion Foundation (FFRF) and the American Civil Liberties Union (ACLU). FFRF calls itself an organization of “atheists, agnostics and skeptics of any pedigree.”

Tatenhove on Feb. 10 ordered the state to pay Hart and his attorneys a total of $151,206.74 in attorneys’ fees and litigation costs.

Hart has received his “IM GOD” plate from the state, the Freedom From Religion Foundation said on its website.

“Groups such as ours have to put in a lot of work to ensure the constitutional rights of ordinary folks,” said Annie Laurie Gaylor, FFRF co-president. “We truly appreciate that the court recognizes this.”

Tatenhove, a nominee of President George W. Bush, is the same judge who in 2016 sided with Answers in Genesis in its legal battle to win tax incentives for the Ark Encounter.

Democrats Walk Out of House Meeting after Pastor Prays for The Unborn, Biblical Marriage (Video)