American Atheists, one of the nation’s largest secular groups, has installed an “Atheist Christmas” billboard in Colorado Springs, urging passersby not to go to church this season. The group has put up several such ads in other cities too.

The billboard, placed on Interstate 25 past Venetucci Boulevard, reads, “Atheist Christmas: The More The Merrier!” according to Denver 7.

The billboard features a mother and her daughter, who is shown reading a text from a friend on her mobilephone: “U going to church this Xmas?” She responds, “Lol. No way. I don’t believe that stuff anymore.” The friend replies, “What will your parents say?” And she texts back, saying, “They’ll get over it. :-p.” 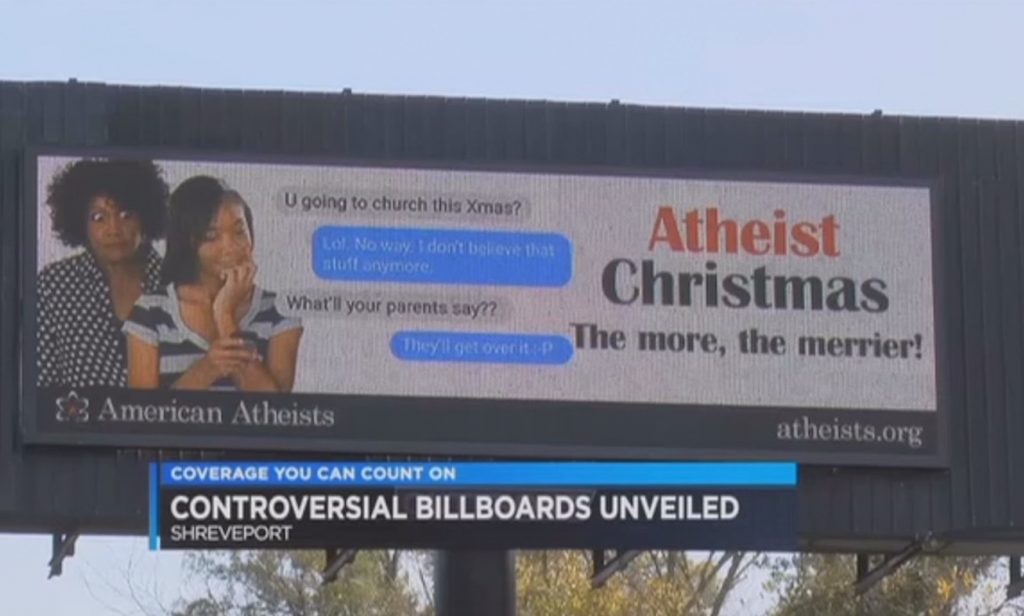 In another billboard, which has gone up in Lynchburg, Virginia, and Shreveport, Louisiana, the group uses a pun on President-elect Donald Trump’s “Make America Great Again” slogan to encourage young people to skip church.

The group explained in a press release that its two billboards have been launched nationwide, and aim to celebrate an “atheist Christmas” and tackle what it called the stigma that non believers face in America.

“It is important for people to know religion has nothing to do with being a good person, and that being open and honest about what you believe — and don’t believe — is the best gift you can give this holiday season,” said David Silverman, president of American Atheists. “More and more Americans are leaving religion, but we still have work to do when it comes to fighting the stigma many atheists face.”

The group pointed to a survey released by the Public Religion Research Institute in September which showed that nearly one in four, or 39 percent of young people aged 18–29 in the U.S. are now religiously unaffiliated.

AA has called on people to “skip church” in a number of its previous holiday billboards, with Silverman telling The Christian Post back in December 2014 that the hope is for the messages to “spur intra-family communication.”

Nick Fish, national program director for the group, said in the latest press release that the only way to remove stigma is to “show our friends and family that we are the same kind, loving and compassionate people they’ve always known us to be.”

“This billboard campaign will be a starting point for that conversation in communities where atheists don’t always have a voice,” he added.