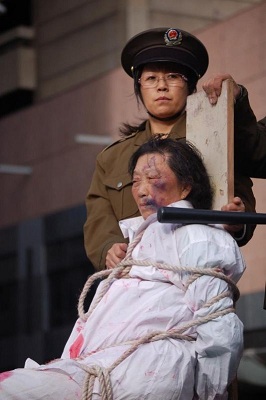 Four pastors were arrested in April for organizing a secret meeting. One pastor shared their traumatic ordeal with an Open Doors worker that for “fifteen days, policemen beat us brutally with  police batons. They beat our heels, muscles and joints. They also didn’t let us breath, putting on gas masks and tying our hands. The attitude toward us Christians was cruel and inhuman.”

During their time in captivity, the brothers were alternately kept out in the sun and heat, and then confined in cells with almost no water and food. Different methods of psychological and physical pressure were used against them. All the beatings were accompanied by interrogations, the main goal of these interrogations and beatings was to break them so they would renounce their faith. Two of the Christian brothers were unable to endure the physical and psychological trauma, and renounced Christ. Please pray for these brothers who have now been released. All of them are broken and traumatized emotionally. Pray for them, especially for those who denounced Christ under the intense pressure. Pray for their spiritual, physical and emotional recoveries, and for their families.

On May 15, there was to be a court hearing regarding the accusations of “Illegal religious meeting and Illegal religious activity.”(Open Doors will post a follow-up when we receive information regarding this trial) If the accusations were upheld, each of them would be required to pay a fine of more than $800. Open Doors workers there have helped secure a lawyer to lobby for the judgment to be rendered for a lesser amount.

These pastors and their families will need a time of recuperation; some of them may perhaps need to leave the country for a time.

Please always pray for them.