There were many risks involved……….Despite the risks, the two-week-old boy pulled through 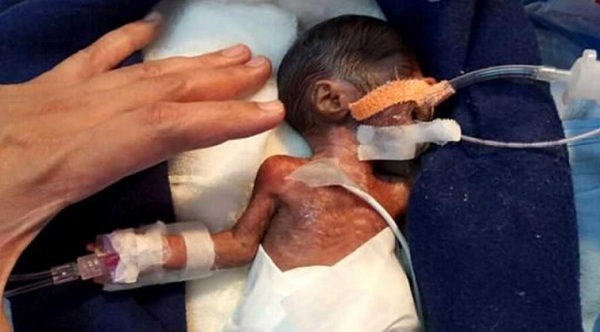 The baby weighed just one pound and had the length of a palm at birth. The newborn boy was also unable to be touched due to underdeveloped eyes, lungs, and skin. Besides that, it suffered heart problems because two major blood vessels of the heart were connected. It became life-threatening.

“There were many risks involved, like respiratory distress syndrome, brain and lungs internal bleeding, feeding intolerance, developmental problems,” said Dr. Sanjay Gandhi. Despite the risks, the two-week-old boy pulled through. It’s continuing to recover and grow.

The child’s father is overjoyed with gratitude. He told the Daily Mail about is son: “He is so brave that he has survived so many odds with such low weight.”

“Our prayers have been answered.”

How God Healed Me Of Cancer – Joyce Meyer

I Was Brainwashed By Hollywood Elites, Adrianne Curry Apologizes for Judging Kirk Cameron for His Faith