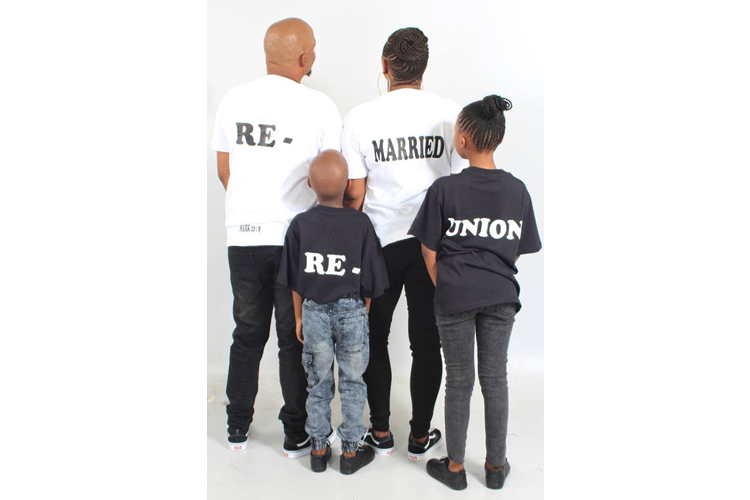 South African Pastor, Abi Ranyane is thanking God for a miraculous restoration in his marriage after years of divorce with his wife, Zandile Ranyane.

Abi had divorced his wife, Zandile Ranyane, for 2 years but through instructions from God and the intervention of two of his colleague Pastors, he reunited with his wife and they got remarried. According to the pastor, he initially blamed his wife for the divorce and it was only after seeking God’s guidance that he realized it was actually his fault.

The man of God took to his Facebook to share beautiful pictures of the simple remarriage ceremony online and a brief explanation of what led to their divorce two years ago.

Pastor Abi who poured out his heart in a Facebook post said that he neglected his first assignment on earth which is his family and appreciated God for miraculously bringing him and his wife back together.

After a divorce of two years where we both believed we wanted nothing to do with each other and had already moved on with our lives, the Lord miraculously brought us back together, using two great man in my life Pastor Andre & Christine Wilman and Apostle Theo Wolmanrans. I thank them for being so hard on me even when I was upset and did not agree with their counsel because I wanted what I wanted. I almost left and disassociated with CFCI, was hurt, offended and felt alone while running a church. Well I realized later that where I was was actually the GRACE of God. I believe they were led by the Lord to be that hard on me and I’m happy they did. I went on to trust God to change their hearts and began praying and studying a lot about my divorce situation. The Lord began dealing with me and yes He did change a heart but it was not theirs but mine. All the time I believed my wife was the reason we divorced because of how she dealt with things when upset but the Lord showed me in many ways how the divorce was actually my fault, how I was the one who was the main contributor to our divorce.

THIS WAS VERY HARD TO ACCEPT AS A PASTOR.

I was too focused on the ministry as the church had just started, I neglected my wife and made her feel second best. I put so much pressure on her to be the perfect ‘Pastors Wife’. All that mattered was me! me! me! and my calling. I created a very angry wife and actually misrepresented God and ministry to my wife (just like Moses misrepresented God to the Isrealites). She started resenting both God and the church. That was wrong and actually evil. So I accepted my wrong, repented and began to trust God to bring my wife back and started pursuing her. She rejected me for two months but with prayer and fasting and consistent confessions taught by my Father Apstle Theo, the Lord brought her back. Yesterday we renewed our vows and got RE-MARRIED

Former Gay, Lesbians And Transgenders Share Stories Of Transformation At US Capitol

The Lord taught me and still is teaching me ‘Selflessness in Marriage’. My love for my wife was selfish, I was full of myself, my ministry and what I wanted. Neglected my first ministry which was my marriage. Never again.

I know many will be shocked by this as I decided not to talk about it and walk this walk alone with what I believed God wanted me to do. I didn’t even tell my spiritual authorities or even my parents until I was back with my wife. This was only between three people; God, me and my wife.

Above All Else Guard Your Heart, because out of your heart flows the issues of your life.