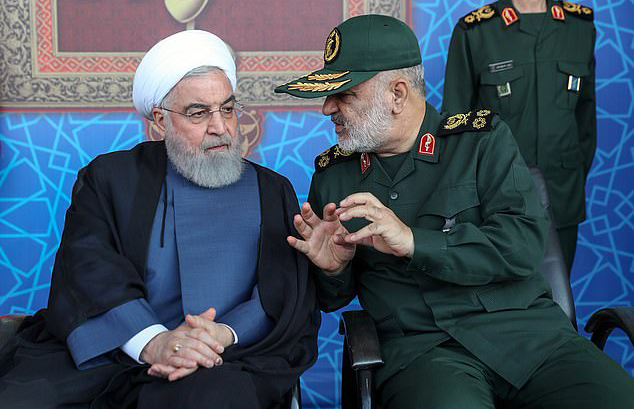 The commander of Iran’s Revolutionary Guards said on Monday that destroying arch-rival Israel was an “achievable goal”.

“This sinister regime must be wiped off the map and this is no longer … a dream (but) it is an achievable goal.” This was the declaration of Iran’s Revolutionary Guard Corps commander, Gen. Hossein Salami. He added that his country has “managed to obtain the capacity to destroy the imposter Zionist regime.”

Americans might read Gen. Salami’s statements as political posturing. In Israel, they do not have that luxury.

When I was in the Holy Land last week, I asked several of my Israeli friends to identify the external threat that most concerns them. Each of them answered instantly and emphatically: “Iran.”

The Israeli government agrees, stating: “Iran publicly denies the Holocaust, and is the only country that openly calls for the annihilation of another state—the State of Israel. Furthermore, Iran has been developing and testing rockets that it boasts can, and will, be used to wipe Israel off the face of the earth.”

But the good news in Iran is both remarkable and surprising.

THE FASTEST-GROWING CHURCH IN THE WORLD

If I asked you to name the country with the fastest-growing church in the world, would you put the Islamic Republic of Iran at the top of your list? According to Sheep Among Wolves, a two-hour documentary about the revival taking place within Iran, you should.

Frontier Alliance International (FAI) produced the documentary and supports disciple-making teams targeting the unchurched and unengaged. FAI points to researchers who believe the underground church in Iran is the fastest-growing Christian church in the world. Even Iran’s intelligence minister agrees that Christianity is spreading in his country.

Three factors explain this remarkable spiritual awakening and offer us steps to take in joining this movement where we live today.

ONE: THE COMMITMENT TO DISCIPLE-MAKING

Their disciple-making movement leads people to become “conformed to the image of Christ and sanctified. They are not just reading the Bible for information. They are reading the Bible to get transformed.” As a result, “Our model inside Iran is that we don’t convert to disciple, we disciple so we can convert.”

According to one Iranian leader, about 55 percent of the disciple makers are women: “They are leading this movement, going out in the highways and byways sharing with prostitutes, drug addicts, with everybody they come into contact with, and that takes courage. They are courageous women.”

How are you making disciples today?

TWO: THE ROLE OF PERSECUTION

Open Doors is a “community of Christians who come together to support persecuted believers in more than 60 countries.” They rank Iran ninth on its list of countries persecuting Christians. Iranian Christians are regularly arrested for their faith.

And yet, an Iranian leader asks, “What if I told you the best evangelist for Jesus was the Ayatollah Khomeini?” He explains that the ayatollahs brought the true face of Islam to light, showing people that it is a lie and a deception: “After 40 years under Islamic law—a utopia according to them—they’ve had the worst devastation in the 5,000 year history of Iran.”

Persecution of Christians has not only led Muslims to leave Islam—it has also purified the church.

When facing opposition to your faith, are you a convert or a disciple?

THREE: THEIR RELATIONSHIP WITH ISRAEL

The film shows that “behind the curtain of what God is doing [in Iran], God is raising up one of the fastest-growing movements of former Muslims that are falling in love not only with the God of Israel, not only Israel’s king, not only Israel’s Messiah, they are actually falling in love with the Jewish people. As a result of this you have a prayer movement in Iran that is crying out for the salvation of Israel.”

And so, it turns out that praying for spiritual awakening in Iran is a critical way to pray for the peace of Jerusalem (Psalm 122:6). Such a surprise is no surprise for our sovereign King.

Are you praying for spiritual awakening in Iran, Israel, and your nation?

“THE GATES OF HELL SHALL NOT PREVAIL AGAINST IT”

In Matthew 16, Jesus takes his disciples to Caesarea Philippi, where they are surrounded by temples and idols dedicated to the worship of Caesar, Zeus, Baal, and a pantheon of pagan deities. Unspeakable immorality was practiced here in the name of these false gods.

At this very spot, our Lord announced, “I will build my church” (v. 18a). Not in Jerusalem at the temple or Capernaum at the synagogue. Not at a place of spiritual retreat and peace. At the most horrifically ungodly place known to his culture.

We are the church to the degree that we are attacking the gates of hell.

We are the church to the degree that we are attacking the gates of hell.

Are you part of the church?