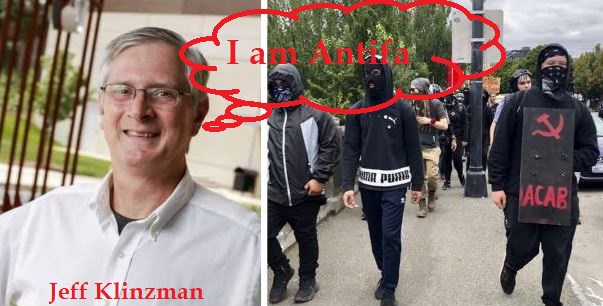 An Iowa professor who openly declared his support for the violent leftist group Antifa has been forced to resign from his position at a community college after posting comments online stating that he wants to “kill all” Christians and “clock” President Trump with a baseball bat.

Jeff Klinzman, an adjunct English professor of almost 10 years at Kirkwood Community College in Cedar Rapids, wrote he wants to “stop evangelical Christians” and “kill them all and bury them deep in the ground.”

The professor then added, “It’s not pretty, and I’m not proud, but seeing what evangelical Christians are doing to this country and its people fills me with rage, and a desire to exact revenge.”

The school stated that the professor was not removed due to his views or his right to express them, but the decision was based solely on their commitment to harboring a safe learning environment for students, faculty and staff.

The college stated: “However, when the expression of views by him or any member of our community is perceived as placing public safety in jeopardy or hampers our ability to deliver on our mission, we will always do what is necessary in service to our students’ pursuit of a higher education.”

Earlier this month, President Trump tweeted that “major consideration” is being given to naming Antifa a terrorist organization.

“Major consideration is being given to naming ANTIFA an ‘ORGANIZATION OF TERROR’,” the President tweeted. “Portland is being watched very closely. Hopefully the Mayor will be able to properly do his job!”