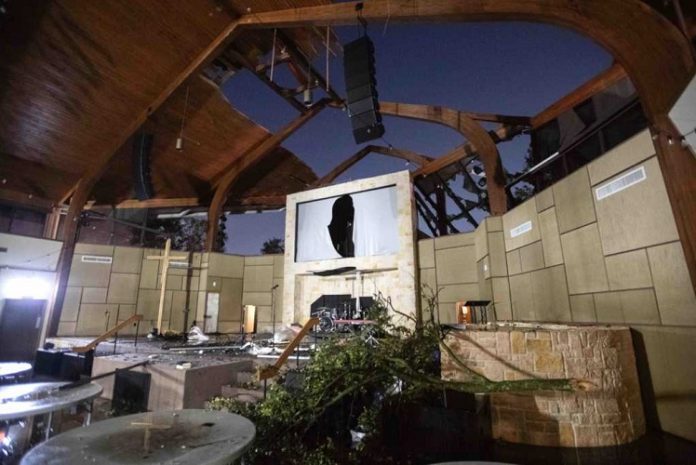 After nine confirmed tornadoes ripped through the city of Dallas and its surrounding areas on Sunday night, one church is celebrating God’s kindness despite catastrophic damage.

The EF3 tornado snapped trees and power lines around Northway Church, knocked off their A/C units, and shred parts of their roof over the worship center. But still standing amid the destruction, unmoved, was a wooden cross.

The cross of a megachurch in North Dallas is still standing after a tornado ripped through the worship center on Sunday.

While no one was hurt during the tornado, Shea Sumlin, lead pastor of Northway Church, described the damage it caused as “catastrophic,” adding he is thankful the storm didn’t twist through the sanctuary during services just a few hours before.

There was one thing, though, that gave Sumlin comfort: the cross inside his church’s worship center was still standing, Faithwire reports.

“That cross is a beautiful reminder that the church is not a building,” Sumlin told Faithwire. “We are people who stand upon the rock of our confession that Jesus Christ is the Messiah who has come to save and redeem, and against which, not even the gates of hell (nor an EF3 Tornado!) will prevail! (Matthew 16).”

“Even though our building may be broken, our church is as whole and alive as we have ever been,” Sumlin said. “It’s also a great picture of Christ’s promised presence with His people in the midst of trial and suffering.”

The church’s statement on the damage echoed Sumlin’s own words, saying the congregation is “not without hope” after the tornado ravaged the church’s worship center.

Despite the incredible damage to the church’s buildings, the congregation said its primary focus is on caring for “the needs of our neighbors,” including Thomas Jefferson High School, Cary Middle School, Walnut Hill Elementary, Primera Iglesia Dallas, and the countless homes damaged in neighborhoods of Northwest Dallas.

So far, Northway is staying true to its promise.