Archaeologists in Israel have discovered what they believe to be the site of a biblical city mentioned in the story of David and Goliath.

Charisma News reports that the two-gated city is thought to be around 3,000 years old. Its modern name is Khirbet Qeiyafa and it is in Israel’s Elah Valley. 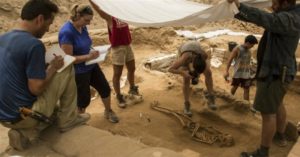 Archaeologists believe the city was referenced in the Old Testament and that its name during biblical times was Sha’arayim, which is Hebrew for “two gates.” The city is mentioned in 1 Samuel 17: 52 which says, “And the men of Israel and Judah rose with a shout and pursued the Philistines as far as Gath and the gates of Ekron, so that the wounded Philistines fell on the way from Shaaraim as far as Gath and Ekron.”

Scientists used carbon-14 dating of some 28 charred olive pits to determine that the city flourished at the end of the eleventh century BCE through the early tenth century, which included the days of King Saul and David.

Professor Garfinkel, along with Professor Michal Hazel of Southern Adventist University of Tennessee, led the excavations.

The excavation of the city has been going on for seven years, but the public is finally able to explore the findings through a Bible Lands Museum exhibit that recently opened in Jerusalem.