It was a powerful moment as Brunson keeled next to the President and laid his hand on his shoulder. 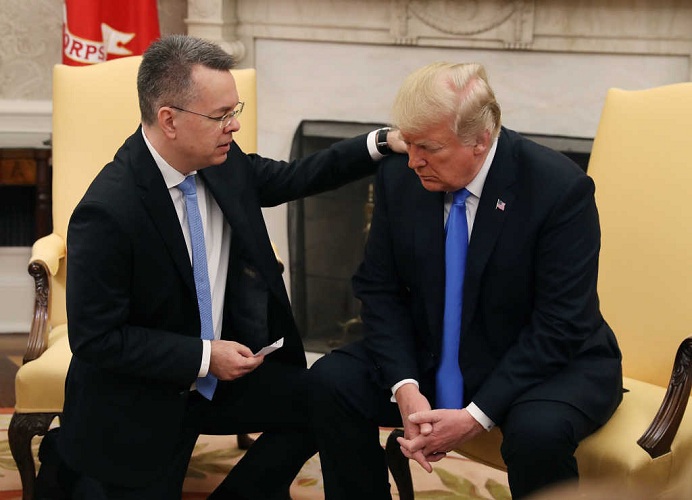 The newly released American pastor Andrew Brunson has openly prayed for President Donald Trump during a meeting in the Oval Office Saturday.

Brunson was invited to the White House following his return to the United States, having been held for two years by Turkish authorities on farcical charges of terrorism and attempting to overthrow the government.

“I need it probably more than anybody else in this room,” Trump said, as he thanked Brunson for the offer of prayer. “That would be very nice, thank you,” the President added.

Pastor Andrew Brunson, freed from being detained in Turkey after almost two years, meets with Pres. Trump, and prays over him in the Oval Office. https://t.co/Wy0dKRBwht pic.twitter.com/ycNwxbUkYF

It was a powerful moment as Brunson kneeled next to the President and laid his hand on his shoulder.

“Lord God, I ask that you pour out your Holy Spirit on President Trump,” the pastor declared as Trump bowed his head. “Would you give him supernatural wisdom to accomplish all the plans you have for this country and for him.”

“I ask that you give him strength.. I ask you protect him.. make him a great blessing to this country & fill him with your wisdom and strength,” Brunson Prayed.

Pastor Andrew Brunson prays for President Trump in the Oval Office.
“I ask that you give him strength.. I ask you protect him.. make him a great blessing to this country & fill him with your wisdom and strength.” pic.twitter.com/IqdA3azZyA

Brunson then asked God to give Trump wisdom on “how to lead this country, and to righteousness.” Surrounded by advisors, reporters and photographers, the packed Oval Office fell silent as the faith-filled pastor continued his bold prayer.

The pastor concluded, “We bless him. May he be a great blessing to our country, in Jesus name, Amen.”