City officials granted Satanists permission to erect the monument following the controversy surrounding a Christian memorial at the park. 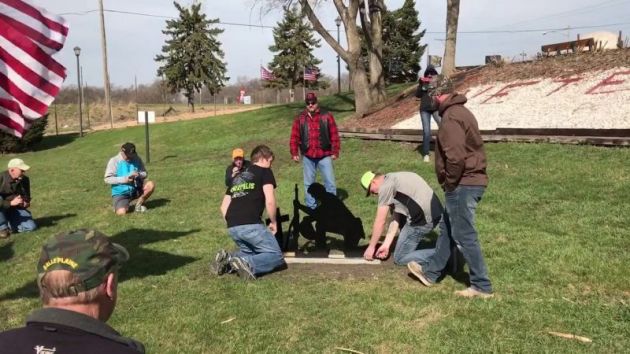 A Minnesota-based Satanic community is set to erect its first Satanic monument on public property. The monument will be placed next to a Christian one, and will appear at The Veterans Memorial Park. The park is used to honor fallen veterans of war, reports CBN. The monument will be a black cube, inscribed with inverted pentagrams and has an empty soldier’s helmet on top of it.

City officials granted Satanists permission to erect the monument following the controversy surrounding a Christian memorial at the park. A two-foot steel war memorial called “Joe” features a soldier kneeling before a cross in tribute to fallen war heroes. It was on display as a memorial to the brave men and women who fought and died for their country.

However, the Freedom From Religion Foundation demanded Belle Plaine remove the Christian statute in January. When City leaders attempted to remove the cross due to fears of an expensive lawsuit, local residents rallied to save it. “Everyone understood this could happen, said Belle Plaine resident Andy Parrish, who led the charge to restore the cross. “It’s more annoying than it is offensive.”

So, the city offered somewhat of a compromise. It rebranded the park area as a “limited public forum” where anyone, including Satanists, is welcome to donate monuments on their own. The cross was reinstalled in April and will share the same space with the satanic monument.

Pray that the Holy Spirit pushes back the forces of darkness and that Christ will be exalted through this situation!