As far as Catholic weddings go, it’s pretty hard to beat being married by the Pope.

But that’s what happened Thursday morning when Pope Francis married two flight attendants in an impromptu ceremony on his papal plane some 36,000 feet over Chile.
Vatican officials say it marks the first time a pope Francis has married a couple on a papal plane.

Paula Podest Ruiz, 39, and Carlos Ciuffardi Elorriga, 41, who had a civil union eight years ago, told the pope that a religious ceremony that was to follow was canceled after their parish church in Santiago was heavily damaged in an earthquake in 2010.

They asked him to bless their marriage. But he had something else in mind. 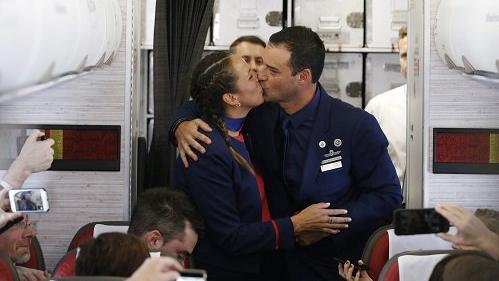 “We told him that we are husband and wife. That we have two daughters and that we would have loved to receive his blessing. All of a sudden, he asked us if we were married for the Church too,” Ciuffardi told reporters afterwards on the plane, which was en route to the northern city of Iquique from Santiago.

The couple explained to the pope how the 2010 earthquake had damaged the church they had hoped to marry in.

The pope performed the brief ceremony in the front of the plane. Ignacio Cueto, president of Latam airlines, who was on board, was the witness.

An improvised marriage certificate was signed by the pope, the couple, Cueto and a bishop who was on the plane.

“Being married by a pope on board a flight is something priceless,” Podest said.

#PopeFrancis married these flight attendants aboard the papal plane flying to Iquique, #Chile this morning.

Their wedding was canceled when an earthquake destroyed their church in Santiago in 2010.