A pastor and his members have been taken hostage by Islamic extremists in the volatile southern region of the Philippines.

Hardline president Rodrigo Duterte has declared martial law in much of the south. Archbishop Socrates Villegas, president of the Catholic Bishops Conference of the Philippines, said the militants forced their way into a cathedral in the town of Marawi and seized a priest, 10 worshippers and three church workers.

“He was not a combatant. He was not bearing arms. He was a threat to none,” Villegas said of captured Father Chito. “His capture and that of his companions violates every norm ofcivilized conflict.”

“I warned everybody not to force my hand into it,” Duterte said, citing his decision to enforce martial law, on a plane to the Philippines on Wednesday. “I have to do it to preserve the republic.”

“The whole of Marawi city is blacked out, there is no light, and there are Maute snipers all around,” Defense Secretary Delfin Lorenzana said late Tuesday. Martial law gives Duterte the use of the military to make arrests. “We will conduct house-to-house clearing and do everything to remove the threat there. We can do that easily,” Gen. Eduardo Ano said. 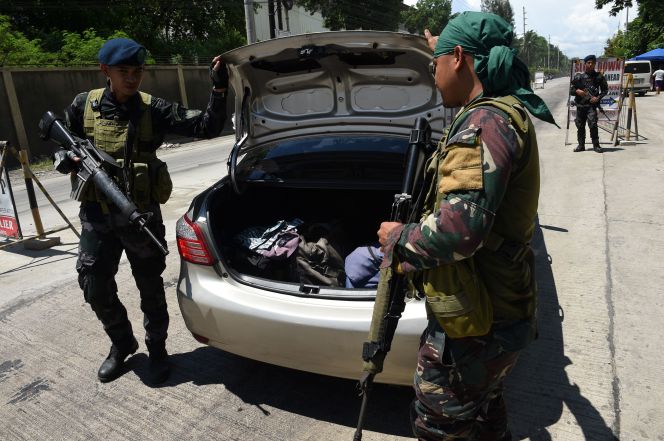