A Christian woman on death row in Pakistan since 2010 had her final appeal postponed on Thursday by the Supreme Court after a judge withdrew from the high-profile blasphemy case.

Asia Bibi, a mother of four from rural Punjab, must wait to learn if she will be spared the gallows after the country’s top court adjourned amid tense scenes and heightened security in Islamabad. 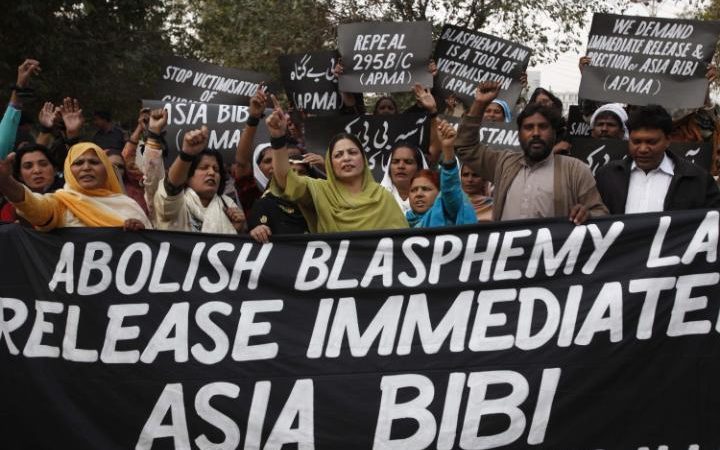 Thousands of security troops had been deployed in the capital, Islamabad, as the court prepared to hear a final appeal in the case of Asia Bibi on Thursday.

The court did not immediately set a new date for the appeal.

But the threat of violence was largely abated when one of the three-judge bench, Justice Iqbal Hameed ur Rehman, told the court he had to recuse himself from the case.

“I was a part of the bench that was hearing the case of Salmaan Taseer, and this case is related to that,” he told the court.

Taseer, a liberal provincial governor, was shot dead in Islamabad in 2011 after speaking out for Bibi.

His assassin, Mumtaz Qadri, was hanged earlier in 2016 in a step welcomed by liberals in the country, but which brought hardliners into the streets calling for Bibi’s death.

A senior police official said that up to 3,000 forces were deployed in the capital on Thursday.

“Security is very tight in Islamabad all around today. Additional troops have been deployed on checkpoints and city junctions in general. There is also deployment of paramilitary force Rangers and FC [Frontier Corps] on some additional points,” a police source told AFP news agency.

Up to 100 officers, many in riot gear, were stationed outside the Supreme Court as Bibi’s lawyer and husband arrived for the hearing, with more throughout the city.

“I have made my preparation, we are very hopeful,” Bibi’s lawyer Saif-ul-Malook told AFP earlier.

Blasphemy is a hugely sensitive issue in Pakistan.

Rights groups complain that the controversial legislation is often abused to carry out personal vendettas, mainly against minority Christians.

Bibi was convicted and sentenced to hang in 2010 after an argument with a Muslim woman over a bowl of water. Her supporters maintain her innocence and insist it was a personal dispute.

But successive appeals have been rejected, and if the Supreme Court bench upholds Bibi’s conviction, her only recourse will be a direct appeal to the president for clemency.

She would become the first person in Pakistan to be executed for blasphemy.

The repercussions for minorities, human rights and the blasphemy laws will be “tremendous” if that happens, said Shahzad Akbar, a human rights lawyer.

Observers have warned of possible violence if the conviction is overturned, with some calling the case a battle for Pakistan’s soul as the state walks a line between upholding human rights and appeasing hardliners.