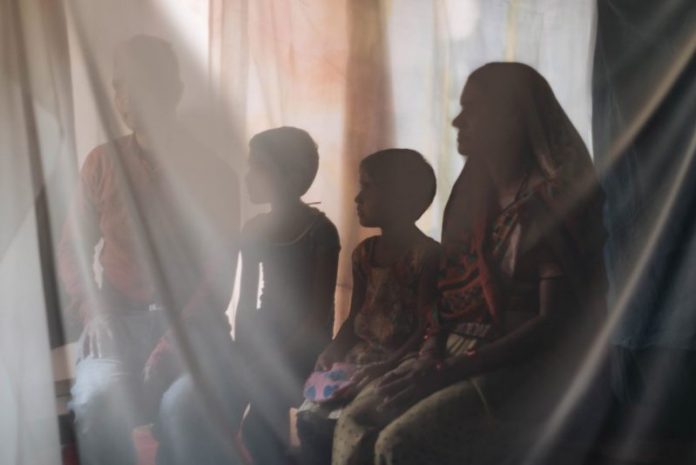 Arjun is a bread deliveryman. He wakes up at 4 a.m. each morning to deliver bread, cakes and donuts to nearby villages on his bicycle. He doesn’t return home until late at night to see his wife, Neha, and his two daughters, Rena and Pari.

During a low time in Arjun’s life—after he had lost a job and struggled to find hope—a friend introduced him to a pastor. The pastor listened to Arjun’s problems and told him about Jesus. At that moment, Arjun gave his life to Jesus.

“From my true heart I have trusted God,” Arjun says.

Arjun came home and shared his new faith with Neha—who also believed. But after Arjun and Neha decided to follow Jesus, the persecution started almost immediately. In rural India, leaving the village faith is seen as a betrayal to the tribe and even family. First, their in-laws wouldn’t enter their home, and they were shunned by the other people in the village.

Threats From The Village

Neighbors threatened Neha and told her they would cut off their family from the village if they continued to follow Jesus. “Then we told them we will follow Jesus Christ only,” Neha shares. “He solves all our problems. That’s why we are not afraid of you, so whatever you want to do, you can do it.”

Arjun adds, “The villagers would say things like, “We will cut you. We will kill you. We can do anything to you.”

Eventually, the village leaders forbid Arjun and Neha from getting water at the well. They were the only Christians in their village, and the persecution was brutal, but being cut off from their water source made living there impossible. Arjun had to journey more than a mile to another village to collect water every day. It was at this point, they packed up and left the village.

But even through this time, they trusted God to lead the way. “God has given us so much courage. In so much difficulty, God has helped us,” Neha says.

It was during this time that Arjun and Neha met with a few pastors to discuss their situation and decide on their path forward. During three weeks of prayer and discipleship, Arjun’s faith increased, and he knew what God was calling him to do.

He would take his family back home and return to the fiery trials of persecution to be a witness for all that Christ had done in their lives. “In God only are we protected,” Arjun says.

Through our local partners, we connected with Arjun and his family to help them overcome the obstacle of being cut off from the well. Through the support of Open Doors, our team in the field was able to install running water in Arjun and Neha’s home to allow them to stay in their village as a desperately needed light for Christ.

And even though they’re the only Christians in their village, Arjun and Neha find joy in following Jesus. “When we are weak, we worship Him. When we are surrounded by problems, we worship God more,” Arjun shares. “When God calls us to love our neighbor, he simply asks us to follow His footsteps.”

“It is written in the Bible, don’t fear man. I only trust in God,” Arjun adds.

Arjun picks up his Bible and opens up to James 1 and reads for us: “My brethren, count it all joy when you fall into various trials; knowing this, that the trying of your faith works patience. But let patience have her perfect work, that you may be perfect and complete lacking nothing.”

When he finishes, he looks up and smiles. Amid persecution, rejection and ongoing threats, Arjun and Neha have chosen the joy of the Lord—a choice that will echo for eternity.

Arjun and Neha both hope and believe their decision to stay will bring more and more village people to Jesus.

No matter the cost.

India is ranked 10th on Christian support organization Open Doors’ 2019 World Watch List of the countries where it is most difficult to be a Christian. The country was 31st in 2013, but its position has been worse each year since Narendra Modi of the Bharatiya Janata Party came to power in 2014.

Please continue to pray for this family and to encourage them in the Lord.