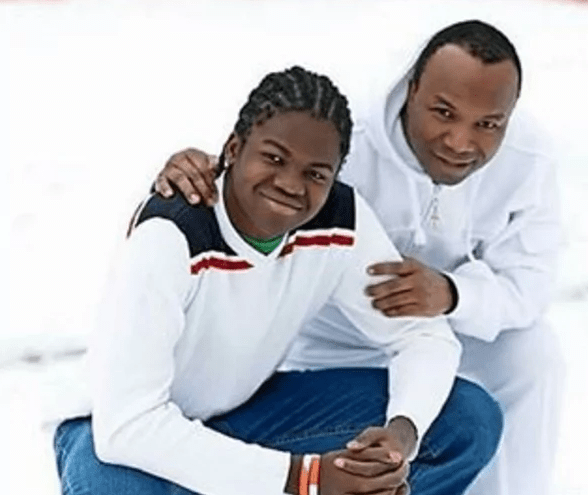 It’s considered inappropriate for Christians to pierce their ears and braid their hair right?

A man who noticed that the son of popular Ukraine-based Nigerian preacher, Pastor Sunday Adelaja, posed with his father while rocking braided hair and earrings, took to his Instagram page to express his displeasure.

The Instagram user identified as @OfficialChrisay, said he was shocked beyond words at the fact that a professed man of God who is the founder and senior pastor of the Embassy of God, an evangelical-charismatic megachurch in Kiev, Ukraine, would even allow his own child look like that.

Sharing the picture above, he wrote:

“Chineke Ekwela Ihe Ojo! Chai! Just Negodu.. What is this on Pastor Sunday Adelaja’s son’s head? Yuck! Why on earth did he allow his son braid his hair like that of “Sango Olukoso”? Did he (Pastor Sunday) not know what his son’s look is saying? Chai! This obviously shows he never challenged his son about his outward appearance. Then if that’s the case, what have you been preaching to your congregation about decency Sir?

“So, is it that you fear your son more than you fear God? Or you would rather offend God rather than disciplining your son? Because I don’t get it. The “Worldly Children” wants to come up to where you are, but here your son is going down to where they are. Does this make a sense? I honestly don’t think so.

“Definitely, some of you reading will not agree with my opinion. You might say where in the scriptures is it written he shouldn’t braid his hair? While some of you will say, what matters is the inside, and not the outside. But then you forget the fact that whatever is in the inside will definitely show on the outside some day. When somebody is mad, he’s mad first on the inside and then it gradually shows on the outside.

“Matthew 5:8 says, “Blessed are the pure in heart, for they will see God”. In other words, if you’re not so pure right, left, front and all through. If your purity is on the outside and not on the inside you’re not going to Heaven. That doesn’t mean, I’m pure as a person, No! But the fact remains, if Pastor Sunday Adelaja preaches the undiluted word of God. And If we look up to him as a role model then he should set the standard straight beginning with his son.

“As far as I know, role models are not those who live like others but those who set a standard for others to live up to. If the sons of Michael Adenuga or Femi Otedola braids their hair nobody cares, but a man of God of his calibre should not allow certain things influence his integrity. That’s my point.

“Trust me, and I mean every word. If l have any doubt whether Pastor Sunday Adelaja is a man of God, this awkward picture of his son has cleared my doubt and it truly shows he doesn’t care about his son. For a pastor’s son to braid his hair and wear earring, and some say, it does not matter, now i ask, what then matters?

“Even common-sense teaches that, this is absurd. Can Pastor Sunday allow his ill-trained son appear for a job interview, the way he is dressed? I’m definitely sure he can’t. Only sodomites, homosexuals, lesbians and sexually perverted people will approve this boy’s demonic dressing. Apparently, some young individuals in his church will start to copy their Pastor’s son appearance, thinking it’s the right thing to do. Sad!

“Trust me when I say this, an ill-trained child, is a time-bomb going to somewhere to happen. Pastor Shame unto you. You must be truly, born again. But then, i pray God opens your eyes to discover what’s inside your son. Because the bible says, in 2 corinthians 5:17 “Therefore if any man be in Christ, he is a new creature: old things are passed away; behold, all things are become New.

“On a final note, Pastor Sunday, you and your son may be fluent in scriptures, even, the devil can recite the entire Bible, yet his portion is hell fire. Please don’t join him. It’s my prayer that God gives you Wisdom.

Suprisingly, Pastor Adelaja responded to the post. He said:

“He is not plaiting his hair. This was 3 years ago. He was visiting America and they did that for him, it so happened that it was during that time the pics were taken. Look in my video section to see how he looks now. Thanks for your concern. Blessings”