According to Maiwada, he was driving with his brother and niece when their vehicle was forced to stop. “We couldn’t even move, so I stepped out,” he shared. “They started beating me with their gun handles and sticks, pushed me back to the car and they started robbing me, meanwhile my brother and my niece hid somewhere when the terrorists were after me.”

“Then, they asked me ‘are you a Muslim or a Christian?’ In Hausa language and I told them I was a Christian, then they said ‘you have entered our hand’, and they intensified the beating.”

The militants then forced Maiwada to trek towards a cave where they would be keeping him.

“We climbed mountains, walked in Valleys at nights, I almost fell off a cliff, but they still don’t care, they said it’s a win win because they will sell my organs if I fall and die.”

Eventually, Maiwada was able to call his family, who raised over $24,000 to secure his release.

“I want to Appreciate God for coming through for me,” he said.

Several twitter users responded to Maiwada’s thread with support and prayers. Many shared that they or their family members had also been kidnapped by Fulani militants.

One man, who goes by the twitter handle @RBizenter, shared that his brother, kidnapped last week, was shot and killed by the militants.

“His burial is today by 12pm in Ibadan,” he said. “Was abducted last week and shot after contacting us for ransom. We were hopeful of his release until Monday we heard he was dead.”

Maiwada replied that he initially wanted to keep quiet about his ordeal but changed his mind to raise awareness of the ongoing attacks in his country.

“Some people here thought we just created stories,” he tweeted. “I wanted to be quiet about my experience but on second thought, I have to voice out..”

Still, there were many on twitter that didn’t believe Maiwada’s account, and concluded that his story was a hoax.

“This doesn’t sound true though…” said one user, while another added, “go and work stop begging online.”

Since 2001, Fulani militants have killed and kidnapped thousands of Nigerians, particularly targeting Christians.

While the issue has been ongoing, the Nigerian government has done very little to stop the attacks and remains adamant that religion plays no part in the conflict.

Nigeria’s Christians are very aware of their lack of government support and are urging the international community to help put an end to their decades of abuse.

“After, some people will come and say there’s no jihad agenda,” said one twitter user. Maiwada replied, “Well, they clearly have an agenda and it’s clearly working and they are so proud of it, telling me no one can stop them.”

LETS CONTINUE TO BE PRAYERFUL BRETHREN 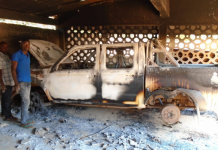