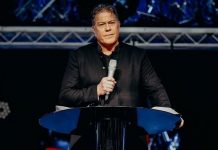 Coronavirus: Pastor Tweets ‘Jesus is My Healer’ From Intensive Care After...