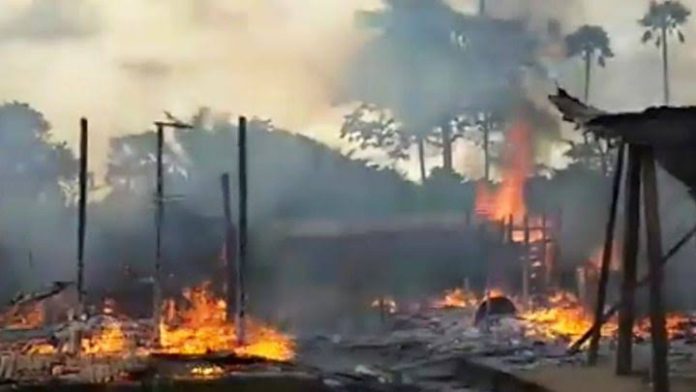 Suspected Islamist jihadists have burned down makeshift buildings of three churches just three weeks after the buildings they had replaced were burned down, sources said.

The three churches, belonging to Sudan Interior Church, the Roman Catholic Church and the Orthodox Church, all in the Bout area of Tadamon District, in the southeastern Blue Nile state of Sudan, were set ablaze on Jan. 16, according to World Watch Monitor.

The congregations of these churches had constructed temporary structures as worship places after the original buildings were completely burned down on Dec. 28 by suspected Islamists, according to Morning Star News.

Some local Muslim residents were not happy that the churches existed in that area, the source said.

Members of the churches filled a case against anonymous people, but local authorities had not started investigating the attacks or provided any protection to the churches, Sudan Tribune reported.

A local group, Human Rights and Development Organization, has called on the government to “immediately take action and hold Bout police to account for” their failure to prevent the attacks.

“HUDO is very concerned about the rights of worship and calls upon Sudan government to take urgent action in safeguarding the constitutional rights of the affected citizens,” the group said in a statement.

However, Sudanese Minister of Religious Affairs Nasredin Mufreh claimed that police had arrested and questioned a suspect but he had to be released due to lack of evidence. He also claimed in a statement that only one church building was burned.

Mufreh added that Sudan was committed to religious freedom and protecting houses of worship.

After South Sudan seceded in 2011 following a long war and a referendum, Omar al-Bashir, who was then the president of Sudan, said he would adopt a stricter version of sharia and promote only Islamic culture and the Arabic language. However, after al-Bashir was ousted last year, the U.S. State Department removed Sudan from the list of Countries of Particular Concern for “systematic, ongoing and egregious violations of religious freedom,” and instead put it on a watch list.

In his speech on Christmas, Mufreh offered an apology to Christians for “the unjust and clumsy policies” affecting them during the Al-Bashir regime. He also apologized for the oppression of Christians “and harm inflicted on your bodies, the destruction of your temples, the theft of your property, and the unjust arrest and prosecution of your servants and confiscation of church buildings.”

Dec. 25 was declared a public holiday in Sudan, and Christians marched through the streets to mark Christmas.

Sudan ranked 7th on Open Doors’ 2020 World Watch List of the countries where it is most difficult to be a Christian.