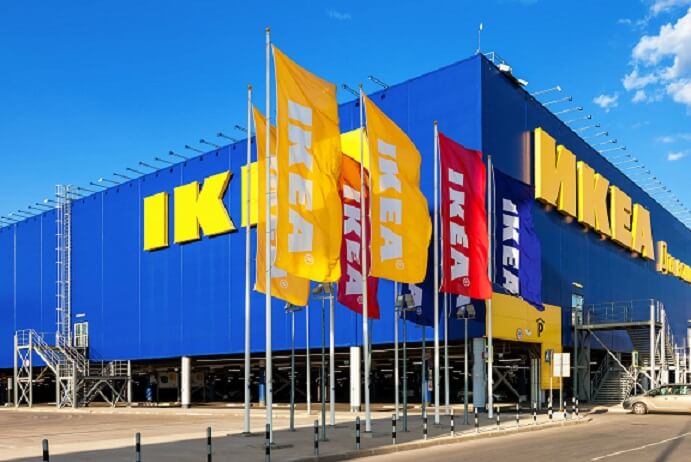 The world’s largest furniture retailer has been accused of anti-Semitism and anti-Catholic bigotry after it fired an employee for quoting Bible verses on homosexuality. It could be recalled that Jaelene Hinkle a female US soccer player withdrew herself from the U.S. National soccer team after it was announced that the squad would be wearing rainbow colored ‘gay pride’ jerseys in their upcoming game.

Long-term IKEA employee Tomasz K. — who refused to reveal his full name for fear that no other company will employ him — worked at the store in Krakow, Poland and was fired after he refused to withdraw Bible verses he had posted in response to the store’s promotion of a pro-LGBT event.

“I was shaken up,” he said. “I’ve been hired to sell furniture but I’m a Catholic and these aren’t my values,” he told the television network TVP Info on Thursday.

IKEA responded Friday saying it had sacked Tomasz K. for “using quotes from the Old Testament about death and blood in the context of what fate should meet homosexual people.”I’ve been hired to sell furniture but I’m a Catholic and these aren’t my values.Tweet

On May 16, IKEA posted a notice on its intranet asking workers to join in celebrating International Day against Homophobia, Biphobia and Transphobia (IDAHOT) “to stand up for the rights of Lesbian, Gay, Bisexual, Transgender plus people of all sexual orientations and gender identities (LGBT+).”

In a following post, Sari Brody, Head of Equality, Diversity and Integration at IKEA, asked employees to pay attention to the pronouns they used.

“Ask for the transgender person’s preferred pronoun (hers, theirs, etc.)” and “engage LGBT + people in conversations about their partners and families,” she ordered staff.

How A Gay Hollywood Designer Found Redemption and Freedom in Christ

Tomasz responded that “acceptance and promotion of homosexuality and other deviations is a source of scandal.”

He justified his response with two biblical quotes: “woe to him through whom scandals come, it would be better for him to tie a millstone around his neck and plunge him in the depths of the sea” (Matthew 18:6) and “If a man lies with a male as with a woman, both of them have committed an abomination; they shall surely be put to death; their blood is upon them” (Leviticus 20:13).

“On our intranet, an article appeared stating that implementing so-called LGBT values is our duty. It upset me,” Tomasz told TVP Info. “It moved me and moved me, because I do not think it was my duty.”

“I put my entry, in which I expressed that it is unacceptable, and quoted two quotations from the Holy Scriptures: about stumbling and about the fact that intercourse between two men is an abomination,” he explained.

“As a Catholic, I cannot censure God. I was told there would be consequences,” he said.

A few days later, “I was informed immediately that IKEA decided to terminate the employment contract,” he explained. “I was supposed to pack right away, empty the cabinet, give up my ID.”

The former employee has filed a lawsuit against the Swedish company. He is represented by the Warsaw-based “Ordo Iuris” foundation, whose members helped to spread information about the case to the media.

The Institute for Legal Culture, Ordo Iuris, revealed that the pro-LGBT corporation had twisted the narrative and “issued a false statement” about the situation. I was supposed to pack right away, empty the cabinet, give up my ID.

In a tweet, Jerzy Kwaśniewski, president of Ordo Iuris, asked if citing a verse from the “Third Priestly Book of Moses” was an “incitement to hate.” Kwaśniewski used Hebrew letters to name the book Vayiqra in Hebrew instead of using the Polish word for Leviticus.

“IKEA — Do you really want to go in that direction? As soon as someone draws historical parallels you will be put to shame,” Kwaśniewski wrote, accusing the Swedish corporate of anti-Semitism.

Ordo Iuris also accused IKEA of “trying to censor the Holy Scriptures” as it “points to a quote from the Old Testament as legally unacceptable and justifying the dismissal of an employee.” IKEA’s statement could be read as motivated by prejudices against Christians, he argued.

Ordo Iuris has filed a lawsuit against IKEA at Kraków District Court asking the court to invalidate the termination and pay compensation to Tomasz K.

The workers’ union Solidarność (“Solidarity”), which gained international fame during the reign of Pope John Paul II, has offered to support Tomasz K., even though he is not a member.

“We are publicizing this matter, we are watching, monitoring. If we can be useful, we will take action,” spokesman Marek Lewandowski said.

Patryk Jaki, a ruling-party legislator and former deputy of Justice Minister Zbigniew Ziobro, has called for a boycott of IKEA if investigations found the retailer was discriminating against Catholics.

Minister Ziobro stressed that Tomasz K.’s dismissal was “unacceptable” and “absolutely scandalous.” He has instructed the prosecutor’s office to investigate whether IKEA violated not only the worker’s rights but also criminal law.

The Ombudsman is also investigating if the dismissal constitutes anti-religious discrimination.

Earlier this week, in a separate incident, an LGBT-driven dispute erupted at the Wrocław Volvo factory after bosses proposed creating an “LGBTQ + community” as part of its operations.

“The employer should be completely transparent, he should not promote sexual or religious or political minorities or majorities,” said Grzegorz Zachara, chairman of the Solidarity trade union, to media. “We leave our sexuality and convictions at the gate, we are equal at work.”

IKEA is aware of Catholic sensitivities in Poland. In May, it produced a special rainbow bag to mark LGBTQ Pride Month, which takes place in June. It said, however, that the product would not be available in Poland.

“IKEA has been involved in the fight for the rights of LGBT + people for many years,” the company stated. “In June, rainbow flags will be waving over American IKEA stores.”

In 2008, Polish Catholics threatened to boycott IKEA after it featured a same-sex couple in its catalogue with the caption “Ian and Steve have no intention of having children” but “enjoy their command centre,” an IKEA kitchen and herb garden.

20 Christians Killed, Others Injured, Missing In Fulani Attacks That Displaced...