Bob Dylan (born Robert Allen Zimmerman; May 24, 1941) is an American singer-songwriter, author, and visual artist who has been a major figure in popular culture for more than fifty years.

In the late 1970s, Dylan converted to Evangelical Christianity, undertaking a three-month discipleship course run by the Association of Vineyard Churches; and released two albums of contemporary gospel music.

When touring in late 1979 and early 1980, Dylan would not play his older, secular works, and he delivered declarations of his faith from the stage, such as:
Years ago they … said I was a prophet. I used to say, “No I’m not a prophet” they say “Yes you are, you’re a prophet.” I said, “No it’s not me.” They used to say “You sure are a prophet.” They used to convince me I was a prophet. Now I come out and say Jesus Christ is the answer. They say, “Bob Dylan’s no prophet.” They just can’t handle it.

However, when a fourth “Christian” album failed to materialize in 1983, a rumor was circulated that Dylan had “renounced” his faith.

Many of his fans, including John Lennon, were horrified by Dylan’s conversion to Christianity. The former Beatle even recorded a record called “Serve Yourself” in response to Dylan’s evangelical song “Gotta Serve Somebody.” Though Dylan has remained quiet about his faith for much of his life, he confirmed as recently as 2012 that he “still believes in Jesus.”

His new album, “Tempest,” is replete with Christian lyrics, as Brooklyn-born Messianic Jew Al Kasha notes: “I am absolutely thrilled that Bob has shown through this new record that he has never lost God’s calling in life,” he said. “He’s never given up.

“I get upset when people think that he has because you don’t write all these songs just out there. It takes time to write them and they’re all about Christ so I’ve said this in the past — the media has hurt rather than helped him.”

Kasha went on to say, “I have known Dylan since 1960 when I was at Columbia as their youngest-ever record producer and they were going to drop him from the label as his first CD only sold 7,000 copies.

“I was 22 years old and they had all of these great artists like Rosemary Clooney, Guy Mitchell as well as Johnny Mathis and Tony Bennett, and when I heard this in a meeting, I stood up and, with my legs shaking, and told all of these veteran record producers, “We can’t drop him. He’s a great song writer and they finally agreed and now the rest is history.”

Despite all of his success, having won two Oscars for the theme songs from The Poseidon Adventure (The Morning After) and The Towering Inferno (We May Never Love Like This Again), (both with Joel Hirschhorn), he had a secret that was destroying his life – he was suffering from agoraphobia.

He told me that it was destroying his life, but then one night, in the bedroom which he woulnd’t leave, he tuned into a late Christian TV show and realized that Jesus was indeed his Messiah. He prayed in his room and gave his life over to Christ and was healed of his agoraphobia.

Not long after, Kasha met up with Jess Moody, pastor of the First Baptist Church of Van Nuys, an independent congregation with some 10,000 members, who Kasha said “was very sensitive to people in Hollywood.” It was Moody who then suggested that Kasha begin studying at theological seminary, and he became an ordained Southern Baptist pastor, and started his weekly Bible study in his home where he would teach with his two Oscars on the piano, as I well know as I often would attend, as would people like Bob Dylan, Donna Summer and Mel Carter.

“We had them all coming along to my home Bible study, and that would include struggling actors and actresses, singers and dancers, but also these big stars as well,” he told me. “At that time, there was no place for them to go so we would try to solve some problems that they were facing that were biblically based.”

He then spoke about Bob Dylan who he said had been told about the study by some friends who had shared about this Jewish man who was teaching about Jesus.

“He came to the house every week for six months. In fact he wrote the album, ‘Slow Train Coming’ in in our house. Bob was, at that time, going through a spiritual search and if you look at his track record as a writer, he was always seeking after Jesus and he finally realized that Jesus was his Savior.”

Kasha said that the night that Dylan prayed the “Sinners Prayer” with him, he was with his friend called Clark Mathias and his wife, Ceil.

I asked Ceil if she could remember what happened and she replied, “I sure do, like it was yesterday. There was an amazing warm feeling in our home and in our hearts, and he [Dylan] just opened up and said [after Al Kasha had asked him if he wanted to receive Jesus into his life], ‘Yes I do, yes I do, yes I do,’ and that was that.”

Al Kasha then added, “And he wrote his whole entire ‘Slow Train Coming’ Album in front of our fireplace.”

Did Bob Dylan ever share those songs with you when he was writing them?

“Yes he did,” said Kasha. “We gave him a key to the house because we were song writers and song writers feel a sense of spirit in a room. You know, Dan, you’re a writer yourself and I am sure you would say, ‘I want to sit where I feel something good.’ So he [Dylan] had a key to our house and we trusted him. I heard the guitar playing some nights but I wouldn’t bother him. It was an incredible experience.”

Kasha added, “He [Dylan] said that he felt out home was ‘spiritually anointed’. So many other people also got saved at our home and I see many of them here tonight for this affair. I could hug every one of them.”

I asked Al Kasha what his all-time favorite of the ones Bob Dylan wrote in his home.

“He has a song called ‘Jesus is Lord’ and I love that one,” he said. “However, there are many that I love and I don’t really want to pick out one because I want everyone to buy the album, but I love a lot of them.”

Kasha said that Bob Dylan was baptized after his conversion in Santa Monica, near Malibu, by people from the Calvary Chapel affiliated church.

“So is Bob Dylan a believer?” I again asked him.

“The answer is yes,” he said firmly, “and I think the world doesn’t like to see someone like him being a believer because he’ll bring other people to the Lord, which he’s done.”

Al Kasha concluded by saying, “Looking back, it is an amazing thing that happened in our home. It’s been all these years and our Bible study eventually wound up seeing people like Donna Summer and Bob Dylan accepting Christ.” 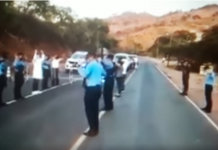 COVID-19: Police On Duty Worship and Prayer Along The Road (Video)

COVID-19: Police On Duty Worship and Prayer Along The Road (Video)