Primate of the Anglican Church in Nigeria, Most Reverend Bishop Nicholas Okoh has warned members of the clergy involved in homosexual act to resign or risk being disgraced out of the communion. Okoh handed the warning yesterday, at the opening ceremony of the All Anglican Clergy Conference holding at the premises of Benue State University (BSU) in Makurdi. 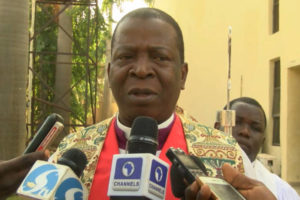 During the event attended by Benue State Governor, Samuel Ortom, the Primate reiterated the anti-gay stand of the Anglican Communion and advised members of the clergy, who have gay tendencies to resign their position honourably or risk being disgraced.

The primate also advised the clergy not to charge money for services rendered to members of the public, saying those found culpable would be sanctioned in accordance with church laws. At least, 15,000 pastors and 200 bishops from across the country are attending the one week long conference.