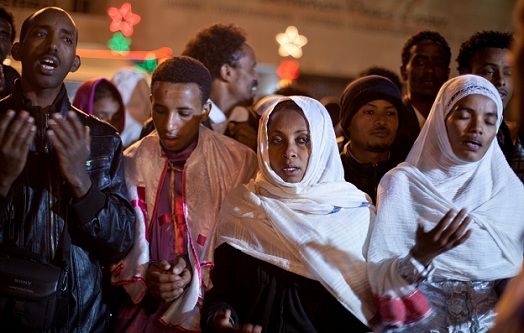 For most of us, the separation of church and state is a given. The government doesn’t generally endorse any one religion or act on behalf of any one religion. But to residents in Eritrea, life doesn’t work this way.

In Eritrea, both Christianity and Islam have ancient roots. Modern-day Eritrea was one of the first countries in the world to adopt Christianity as its state religion in the 4th century, for example. And Islam also arrived early in Eritrea when followers of Mohammed arrived in the region in 615. Still today, many centuries later, Eritrea is roughly equally divided with approximately half of Eritreans claiming to be Christian and the other half claiming to be Muslim.

Eritrea combined with Ethiopia as part of a federation in 1952. In just a decade, however, Ethiopia decided to annex Eritrea as a province, which triggered a struggle for independence. In 1991, Eritrean rebels won out. Through most of this time and even in transition, there were basic religious freedoms in Eritrea. But in 2002, even though the law technically recognizes a separation of church and state, the government ordered the closure of all religious groups except for the Orthodox Church of Eritrea, Sunni Islam, the Roman Catholic Church and the Lutheran supported Evangelical Church of Eritrea.

Many other Christian groups not recognized by the government were forced to go underground to practice their religion, and adherents were threatened with severe consequences if caught gathering or worshipping.

Jehovah’s Witnesses were one of the first to be targeted. Between 2003 and 2005, the state moved on to targeting Christians they labeled Pentecostals. The term “Pentecostal”—or “Pentay,” however, is a generic one that the state uses to refer to Protestants in general even if they do not identify themselves as actual Pentecostals.  In actuality, many of these believers belong to the Ethiopian Evangelical Church Mekane Yesus, which was formed with the support of Lutheran and Presbyterian missionary organizations.

Unfortunately, these and other Protestant Christian groups are considered a threat to the state. According to one religious liberty report from 2010, for example, Eritrean President Isaias Afewerki was said to fear Christian evangelism because it could destabilize and disunify the country.

Considered enemies to the state, the government enlists community members to spy on certain Christian groups who they see as “agents of the West.” Once identified, there are reports of Christians houses being attacked and believers being tortured, beaten, and imprisoned in horrific conditions. Some Christians have even been locked in metal shipping containers where they died of heat exhaustion and suffocation.

Today, thousands of Christians are being held in detention without being charged with a crime or given the opportunity for trial. Other Christians, not yet detained, continue to flee the country. There are also reports of Christian leaders being tortured and asked to recant their faith or sign statements that vow they will not practice their faith, gather to worship or express their beliefs in any way.

Unfortunately, while some Muslim groups face persecution as well, radical Muslims also appear to be gaining support from the government, including possibly even supplying one group with weapons. These Muslim adherents claim to be ‘Muslim first’ and see leaving Islam to convert to Christianity as a betrayal of their community. These radical Muslims are increasingly targeting Christians with violence and the state, who outlaws most Protestant groups, offers no protection.

The government, in fact, denies persecution is even happening. Despite Amnesty International reporting arbitrary arrests without trial on a large scale, the government has called such claims unsubstantiated.