In the whole of southern Borno, over 90% churches have been destroyed. 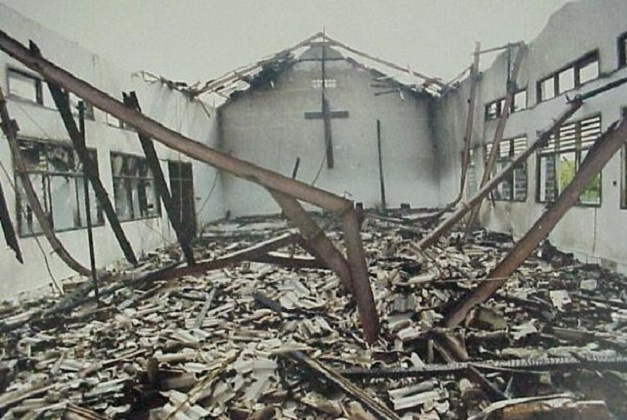 There are still no official figures of Christians displaced from the region but Christian organisations say the numbers are well over two million. The Christian refugees are scattered in at least 10 major cities in Nigeria; from Abuja, Nigeria’s capital city, to state capitals like Jos, Kaduna, Bauchi, Yola, Taraba, Damaturu, Makurdi, Lafiya, Gombe and many more.

Unlike Muslim refugees, many displaced Christians have been absorbed in homes and with Christian families and communities in most of these cities. Those that are unable to move out of Borno are trapped in government camps in the north-east where they are still suffering discrimination by both federal and state government officials who are themselves predominantly Muslims.

Christians in refugee camps, like Bakassi and Bakalori, in Borno are forced to convert to Islam to be able to get food. “Whenever supplies come, the sharing is chaotic. The officials would make us queue and usually fights break out as people struggle to jump queues and if you are a Christian, you are harassed and insulted. “‘Get out infidel!’ is usually what you hear all the time,” said Margaret, who was forced to leave the government controlled NYSC camp in Maiduguri.

“Muslim men come in their cars every evening and women are ‘arranged’ for them by some camp officials and middle men who have access to the camps,” Margaret added. Prostitution is rife in the camps she explained, “and our young vulnerable Christian teenage girls are being destroyed by men. They deceive the girls, get them pregnant and divorce them,” she added.

“Many times the Muslims come to meet us (women) and say they want to marry us and take us away from the suffering. They say we should simply convert to Islam and all will be okay.”

Rifkatu Dauda, whose husband was killed by Boko Haram said, “I always feel so insulted and angry that terrorist Muslim killed my husband and child and another Muslim comes to ask me to convert and marry him…”

“Are these people thinking? Why are they treating me like an animal?” she said and went on to cry. Her pains and trauma quite visible.

The persecution of Christians and discrimination against Christian communities are evident, Christian leaders in Borno said, “in the whole of southern Borno, over 90% churches have been destroyed.

From Danboa to Chibok to Gwoza, up to the Cameroonian boarder only small make-shift churches exist where very few Christians have remained or are asked to return.” Rev. Andrawus Yakubu said. “The Jihadists have destroyed every single church and we are talking of hundreds of churches.

There are still some of our pastors that are missing. We do not know whether they are alive or dead. We only pray that they have fled to Cameroon or so because we know that Boko Haram has slaughtered and executed any pastor they met.” He added.

The Borno State government said it had rebuilt at least 20 churched in Borno. But the picture the government is trying to paint, to show its magnanimity is false, some pastors said. Thousands of churches have been destroyed, “and you pick only 20 and rebuild, even those you build are simply to show the world that you are not anti-Christians, I think is hypocritical of the governor when the state continues to persecute Christians.” A pastor who discussed the challenges of the church in Maiduguri said. “As you drive into Maiduguri from Damaturu, please do observe for yourself how many villages have been rebuilt by the Borno government. In each of the villages, the government will build a large mosque, whether that mosque existed before or not.” He said.

A government official who does not want to be named pointed out reports of many churches and Christian communities destroyed by Boko Haram which have been neglected by the government. “How many roads are accessible in southern Borno despite all the monies the government has received? Are these not the places Boko Haram has destroyed. Why have the homes of Christian not been rebuilt there? Why do we see only mostly Muslim communities being built?” He said. “Let me be frank with you. Christians are afraid to talk and challenge the government because as soon as you stand out or speak out, you are targeted and killed. We have lost pastors here in Borno.” He added.

“What we know is that so much money is coming into the north east and Borno state in particular. We know also that Non-Governmental Organisations (NGOs) have pumped in so much cash in this state, but how has this improved the lives of Christians? This is what we Christians are asking?” The government official said.

“When you look at the big picture, the army, rather than concentrating in finishing the insurgency and destroying Boko Haram and getting us back to our villages, the soldiers are also now involved in buildings and constructions as well as humanitarian activities like the NGOs. Do they want this war to end? If they care that people are suffering then end the insurgency.” The official said.

The claim of the defeat of Boko Haram by the Nigerian government also has been proved to be inaccurate and contradictory.