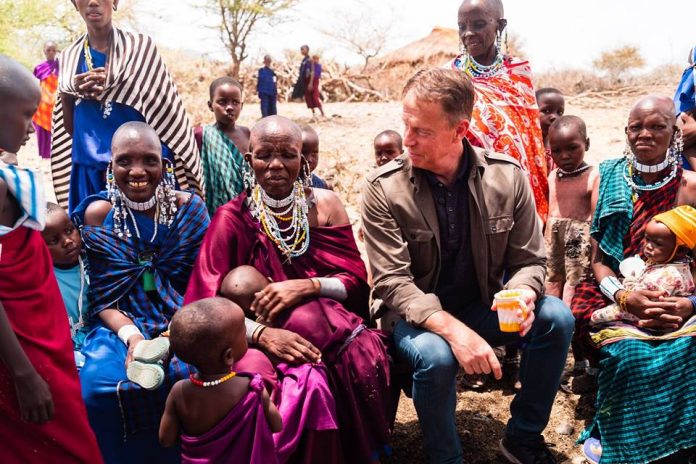 The Maasai tribe is the most authentic ethnic tribe of Kenya. Considered a unique and popular tribe due to their long preserved culture, the Maasai people have clung to their traditional way of life, making them a symbol of Kenyan culture, despite education, civilization and western cultural influences.

Today the story is changing and really fast, as most of the Maasai tribe are Christians, having received the gospel of Jesus Christ.

A recent testimony shared by Pastor Tommy Lilja Ministries, a non-profit charity working around the globe, conducting MEGA evangelistic campaigns and bringing many to Christ, showed many of the tribes deciding for Jesus Christ and accepting his gospel.

Behind enemy lines. You can see the active volcano in one of the photos, it is one of the 3 “holiest” mountains. The closer you get to the mountain, the harder it is to break through with the Gospel. There is major resistance from the Maasai warriors.

Today we flew into this area and landed on a simple path. Here is where our partner Ryefalk, 63 years old, has managed to do in three years what nobody else was able to – a breakthrough for Jesus. I am so impressed by how Jesus is working through him.

Our stop today was the one of many. Now we are preaching our way forward, village by village, until we are standing at the mountain where they worship the gods.
The Maasais were very thankful today. Now the battle continues and more reports will follow.

We will go however far we have to – to reach the people who are left. It isn’t really a choice; it’s a command.
You are a part of this, even if you aren’t here with me, because everything that Jesus does, he does through the body of Jesus. We are in this together.
Thank you for being there,
Tommy

See More Photos From The Maasai Missions Below:

Stories like this, of many turning from their dark religion and traditions to the glorious light of the gospel of Christ have been on the increase in recent times. Recently, Bishop William Harris, the Presiding Bishop of the International Christian Apostolic Fellowship, shared photos from one of his international trips to India where he said over 75 people received the baptism of Holy Spirit, multitudes were baptized in water, and over 100 Hindu and Muslim clerics were taught the word of God. Also of a popular village witch who came dancing with spells, voodoo dust and representing her god, but by the grace of God, was baptized in Jesus Name and came out of the water speaking in other tongues as the spirit of God gave utterance.