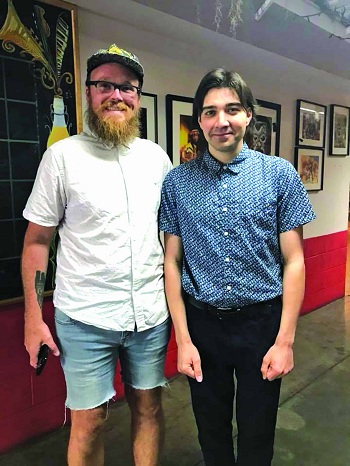 Dezmond Boudreaux, as an Atheist, made it clear to Refuge Church Pastor Justin Haynes he wanted nothing to do with Christianity when the two met in January, but today, the story is different because he wants everything to do with Jesus.

Bitter from past church experiences as a child, Boudreaux eventually became an atheist as a young adult and helped start a Marxist group in New Orleans he hoped would help silence Christianity.

However, Christian love displayed by Haynes and other members of the church caused a change of heart in Boudreaux, who on April 1 became the first new convert of Refuge Church.

Surrounded by Haynes and about 15 others inside the New Orleans Healing Center auditorium April 8, Boudreaux plunged beneath the baptistery waters to publicly display his newfound faith.

“The group I was with hated churches and Christianity,” Boudreaux said. “Once I got into it, I realized there was no peace in what I was pursuing. That’s when I met Justin and found Christ.

From Staunch Atheist To A Preacher: Read Guillaume’s Amazing Testimony

“The whole time I was searching for peace and truth, but could never find it,” he said. “When I found Christ, that’s when I truly found what I was looking for.”

The baptism was affirmation for Haynes that his congregation’s labor was not in vain.

This Atheist’s Near Death Experience Brought Him To Christ

“It was awesome because we had shared the Gospel with so many people and he was the first one to accept,” Haynes said. “To have him come to Christ and be very sincere about it was a very encouraging thing. It was a person who was dead and came to life.”