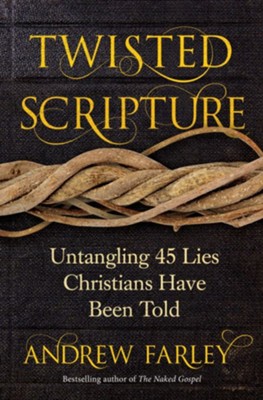 You are saved by Jesus’ death on the cross. You must die to self on a daily basis. A real Christian does not commit sins anymore. It is healthy to be afraid of God. You must donate 10 percent of your income to the Church. According to one author and evangelical pastor, these are all lies.

Andrew Farley, lead pastor of the non-denominational Church Without Religion in Lubbock, Texas, will have a book released on Tuesday titled Twisted Scripture: Untangling 45 Lies Christians Have Been Told.

In the book, Farley seeks to critique common misconceptions about Christian teaching and practice that are believed by Christians themselves.

Topics include views on salvation, charitable giving, divine judgment, forgiveness, how the Old Testament relates to Christianity, and other issues.

For each lie, Farley offers up arguments and biblical references that seek to undermine the claim. Following each rebuttal, the book includes reflection questions and a short prayer.

In an interview with The Christian Post, Farley explained that he compiled the list of 45 lies based off of what he had seen and heard over the years.

“Over the last 20 years I have seen grave misunderstandings among evangelical Christians about the love of God, the grace of God, God’s forgiveness, our identity in Christ. Just seen so many misunderstandings where Scriptures have been taken out of context,” explained Farley.

“So, it just ended up being 45, but because of the reality of what I grew up believing and so many other people believe and so the book is designed to kind of untwist or unclutter and get back to the core message of the Gospel.”

The Christian Post interviewed Farley on Friday regarding his book and topics related to it, including his views on the “prosperity gospel” and the opinion of some that Christians should “unhitch” themselves from the Old Testament. Below are excerpts from the interview.

Farley: I was raised to believe, for example, that you have to ask God for forgiveness every time you sinned so that would relate to Part G in the book, “God forgives you little by little each time you sin.” So I was petrified that if I forgot to confess one, if I left a sin out, if I didn’t realize that I committed a sin that hadn’t been confessed that I would, you know, one day meet the final judgment, meet God there and then have to pay for that sin somehow because I had not confessed it or asked for forgiveness. So that would be a good example and then really just the general idea that at the final judgment I would have to answer for my sins. I think many Christians think they have to answer for their sins at the final judgment, when the whole point of the cross is that Jesus Christ took away our sins and He remembers them no more.

I kind of engaged in a double talk. I would say “my sins are forgiven” and then five minutes later I would say that I had to answer for my sins or would be judged for my sins.

CP: A few of the lies focused on the Christian’s relationship to the Old Testament. Author and pastor Andy Stanley has garnered much controversy over his argument that Christians should “unhitch” themselves from the Old Testament.What is your opinion of this view?

Flirting with Moses is cheating on Jesus. And I think people are running to the Ten Commandments and looking to those as our source of morality and I see Scripture telling us a different story.

CP: The final lie you discussed was “God promises wealth and health to every believer.” Why do you believe the prosperity gospel continues to have a following despite widespread denunciations by leaders within the Church?

Farley: Because those leaders who denounce the prosperity gospel do not have the ear of those who are following the prosperity gospel. It’s plain and simple that health and wealth have been pursued by humanity at large for thousands of years and if you simply put a Jesus stamp on those aspirations and tell people that if they come to Jesus they can have guaranteed health and guaranteed wealth, well you’re always going to have a line out the door as people are looking at God as a divine slot machine where you pour in your quarters and pull down the handle of faith and out comes the blessings.

According to the New testament, that’s a pipe dream. The Apostle Paul had something called a “thorn in the flesh” that he asked God to take from him three times and God said His grace is sufficient for Paul. Timothy had frequent stomach ailments and Paul recommended some red wine for that. He didn’t tell Timothy to have more faith, he told him to take some red wine. So clearly, Christians are not guaranteed healing every single time just because they’re in Christ and likewise, Paul said that for those who look at the Gospel as a means to financial gain are of a depraved mind and that’s pretty strong language.

CP: What are some of the big things you hope that readers take away from your book? 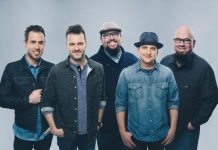 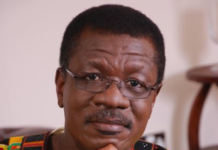