Cameron will host a re-air of the event Oct. 24 for those who missed the live showing. Organizers encourage interested participants to check theater listings for start times in your area.

Movie theaters across the country hosted the first time of worship and prayer as part of the live event, “Revive Us 2016” on Oct. 18. Now it will air again on Oct, 24.

Tens of thousands of Christians came together in unity to pray for America to be a nation of faith again… making the presentation so successful, it was the number one trending movie in the U.S. before it even aired.

CBN News recently spoke with actor and producer Kirk Cameron to learn more about the impact of the event.

“We had so many people come out. Many of the theaters were actually sold out,” Cameron said. “We’ve been hearing people saying its woken them up, its truly revived them, its reminded them of their responsibility to be engaged.

With tension and division in the country at an all-time high days before the presidential election, their message was clear: “America needs Jesus.”

Cameron believes rampant evil and darkness is the perfect time for the Church to step up and shine the brightest. He likes to compare it to Moses and the children of Israel facing Red Sea while Pharaoh’s army barreled down on them.

“I believe for America this is a Red Sea moment for us in our story. What we need to do is what Moses was doing — calling on God to save them,” he said.

Ultimately, Cameron wants people to realize their hope is not in the upcoming election results, but in Christ alone.

“Now more than ever we have to realize that hope is not ultimately in the government or the president or the laws that we pass. Our hope is in the power of God working in the hearts of people,” he says.

That message of hope seemed to get across loud and clear as thousands were tweeting about who they will choose to put their hope in. 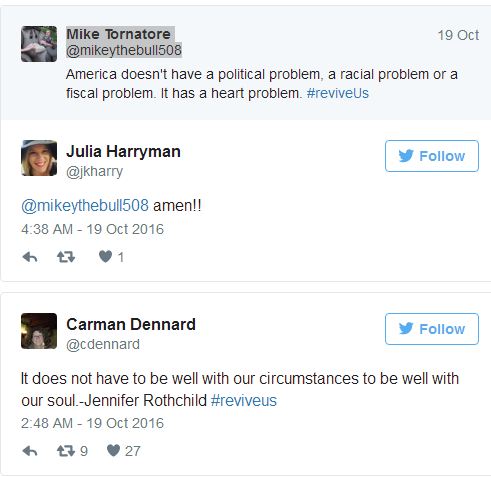